Oni Press comics are no strangers to other media. The pilot for The Sixth Gun television series is being shot for NBC, Scott Pilgrim was made into a feature film, and several other comics are in development.  But until this week, none of the creator-owned comics published by the company have made their way to radio.

“While it would certainly be fun to see the Crogan Adventures adapted for film or animation or television, those iterations would become someone else’s thing,” said Schweizer.  “It would cease to be mine and would instead become the vision of whoever undertook the adaptation.  But with the radio dramas, Gregg gave me complete control over content, and that allowed me to do something that I wouldn’t have otherwise considered possible: tell Crogan stories in a medium other than comics but contribute to the internal continuity of the comics series.”

“It isn’t hard to understand why Chris’ skills as a writer lent themselves so strongly to radio drama,” said series director Gregg Taylor, who recently came to the attention of the comics industry as the writer of last week’s Mask of the Red Panda comic.  “When you read any of his Crogan Adventures books, each character has a distinct voice – a cadence that makes each of them sound as unique as they each look. That sounds so simple, but it’s a rare quality. It comes from having a natural ear for dialogue and really knowing who your characters are. And it meant that the scripts that arrived at my door were strong and audience friendly… and fun as hell to play!”

Schweizer said that it was hard to hear the actors play the characters, at least at first.  “When I write, I often write out loud, and the characters have very specific voices in my head.  While we were recording the first episode, it was kind of hard hearing voices different than what I’d written, but by the time we started the second episode I was completely enthralled.  The actors brought another dimension to these characters that I thought I already knew.  There were a couple of lines that actually choked me up, that had so much more depth to them than I’d have ever been capable of depicting on my own.”

Actor Scott Moyle played a number of characters, including Catfoot Crogan,  protagonist of the graphic novel Crogan’s Vengeance. “Working with Chris’ scripts was a great opportunity to stretch the limits of my skills with new accents and genres,” said Moyle.  “Getting to play Catfoot was icing on the cake – how often do you fall in love with a comic book and then get cast as its hero?”

The shows will be released on the fifteenth of each month from March through August, and are available via iTunes or at the Decoder Ring Theatre website. 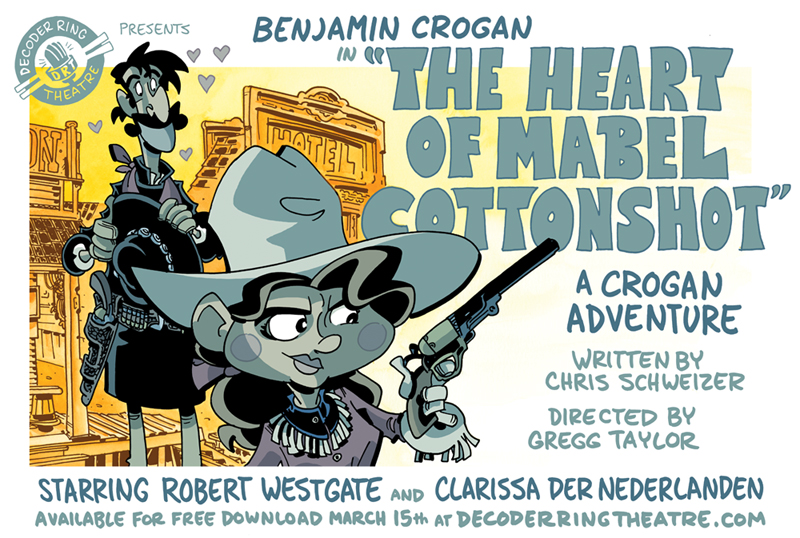