On May 5, 2012 Action Lab Entertainment is going “Confidential.”

Action Lab Entertainment, best known for the indie smash-hit comic book PRINCELESS and the soon to be released DOUBLE JUMPERS wants to give readers the opportunity to read extended previews of their entire catalog of comics and original graphic novels, including some
titles that have yet to hit the shelves.
The goal is to continue to get readers excited in what Action Lab Entertainment has to offer with its diverse lineup of books, ranging from all-ages to mature readers. After reading this FREE 200 page monster you’ll want to rush to your local comic shop or digital tablet and demand for more Action Lab comics!

THE FOLLOWING TITLES ARE FEATURED IN ACTION LAB CONFIDENTIAL: 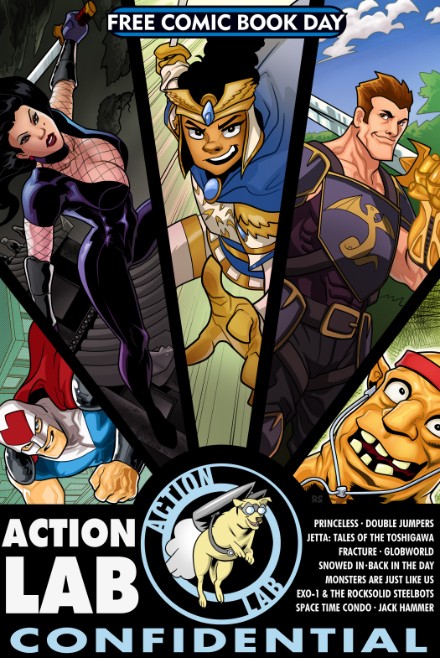 JETTA: TALES OF THE TOSHIGAWA – By Martheus Wade

BACK IN THE DAY – By Dave Dwonch & Daniel J Logan

It also features a front cover by the talented RUSTY SHACKLES!

So this Free Comic Book Day, after you finish your journey to your comic book store, stop by Graphicly, Comics+, or the additional
Action Lab Entertainment digital outlets and download your copy of ACTION LAB CONFIDENTIAL!