New York. NY—July 11, 2013—For decades, the Inhumans have lived sheltered and separate lives from the entire Marvel Universe, led by their fearless ruler, Black Bolt. 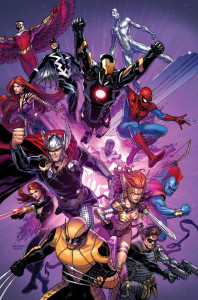 But following the cataclysmic events of Infinity, Medusa, Karnak, Gorgon and Triton along with the rest of the Inhuman Royal Family ascend to the forefront of the Marvel Universe as major players as the world plunges into Inhumanity! Thousands of new Inhumans have powered up around the globe, leaving  Iron Man, Thor, Captain America, Hulk, Spider-Man, Wolverine and the rest of the Marvel Universe to react to this emerging new race of super-powerful, super-strange beings!

“The Inhumans are here to stay, and there are lots of them,” explains Axel Alonso, Marvel Editor In Chief, in an interview with Marvel.com. “Their emergence in the Marvel Universe –during and after Infinity– will be a game-changer. Who’s to say the planet is big enough for everyone?”

Leading the charge on humanity’s bold new age comes the biggest series of 2014, Inhuman #1! From white-hot creative team of writer Matt Fraction (Hawkeye, Fantastic Four) and artist Joe Madureira (Savage Wolverine, Avenging Spider-Man), Inhuman rewrites the rules of the Marvel Universe. No truer words than “Among Us Hide the Inhumans” have ever been spoken, as Marvel explores what happens if you discover you are INHUMAN!?

“The events of Infinity jumpstart a long-dormant genetic inhuman strain.  It leads into a global crisis overnight — in the middle of, and coming out from, Infinity”, writer Matt Fraction said in an interview with Marvel.com. “The idea that there’s a secret super­­ hero city, and I might belong there, was a hook that fascinated me.  Inhuman means I’m telling small, human, intimate origin stories about new Inhuman characters, set against the grander story of the politics of a fragmented royal family battling one another for dominance. It’s unlike anything I’ve ever done.” 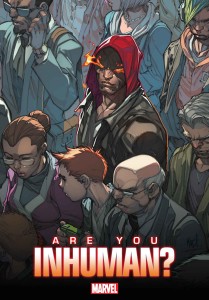 This Fall, the superhuman race takes an uncompromising leap as Inhumanity washes over the Marvel Universe with more heroes—and villains—than ever before!

For more on Inhumanity, please visit www.marvel.com and join the conversation on Twitter with hashtag #Inhumanity. To find a comic shop near you, visit www.comicshoplocator.com or call 1-888-comicbook.

1 thought on “Are you INHUMAN?”