Colonial Radio Theater on the Air announced today that they have entered into an agreement with the comic book publishers Bluewater Productions….

Colonial Radio Theater on the Air announced today that they have entered into an agreement with the comic book publishers Bluewater Productions to produce “Logan’s Run – Last Day”. Based on the the comic books from the novel by William F. Nolan and George Clayton Johnson, and a screenplay by Paul J. Salamoff. CRT’S audio play will bring this incredible story to life with a full cast, full music score, and thousands of sound effects. “We’re very excited to have this opportunity to do ‘Logan’s Run’ the way it should have been done – as the author originally envisioned it,” said producer Mark Vander Berg.

Also slated is Bluewater’s cult comic book anthology series “Vincent Price Presents”. One of classic Hollywood’s most famous scary men, Vincent Price made a name for himself in classic mysteries and thrillers throughout the 1940’s, 50’s and 60’s. Now Vincent Price Presents comes to Bluewater Productions as their 1st ongoing monthly series.   The series will feature some of Prices’s films as well as developing new frightening ones with his estate.

Explained producer Jerry Robbins: “Audio drama is very close to what the author intended. When reading a book, people have a certain image of the characters, the setting, the action. When it’s made into a movie it’s all shattered because it doesn’t look like what’s in their mind. The good thing about audio is that it looks just like you pictured it. Your vision is perfectly intact. This is the Theatre of the Mind – you supply the vision, we supply the sound.” 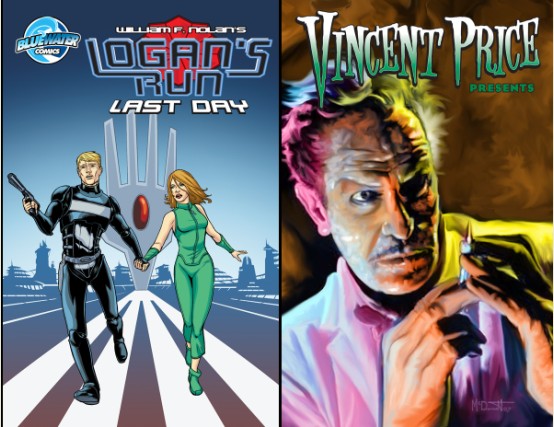 Celebrating it’s 15th year, the award winning Colonial Radio Theatre on the Air’s goal is to resurrect an old medium – making it modern and relevant – in a new and unique way for people to enjoy. With people’s busy schedules keeping them on the road and limiting their time to read, “This is the future,” said Vander Berg, “audio drama is the next wave.”

The production of “Logan’s Run” continues an increasingly strong science fiction addition into CRT’s lineup of historical dramas, classic literature, fairy tales, and westerns with upcoming releases by both Ray Bradbury and Walter Koenig.  Unlike video, when audio is digitally recorded now as CRT does it – with the best talent in the industry – it will never become dated by passing fashion and film techniques.

”Logan’s Run – Last Day” depicts an ageist future society in which both the population and resources are maintained by requiring the death of everyone reaching a particular age. The story follows Logan, a man charged with tracking down and killing citizens who “run” from society’s lethal demand – only to end up “running” himself.

“Logan’s Run – Last Day” is expected to be released in early 2011 on Sirius/XM Radio, by download on the internet, and on Brilliance Audio CD available at retail outlets.  “Vincent Price Presents” will be released in October 2010.

More information can be obtained by visiting http://www.colonialradio.com/