If you haven’t checked out BOOM! STUDIOS’ new series DEATHMATCH yet, (Issue #1 was only $1, so you have no excuses) now’s your chance! The first volume of the trade, collecting issues 1-4, hits in April, and it’s only $9.99. Now, sure, the industry is saturated with BATTLE ROYALE/HUNGER GAME-esque storylines, but this one is the best of the bunch. Brilliantly written and gorgeously rendered, heck even is Sebastian and Shaun have raved about this book on FFFIC (our own comic review show, right here on InvestComics! Give it a watch!) and they rarely agree on anything, so that’s saying something!

Here’s the full release from BOOM!

DEATHMATCH VOLUME 1 HITTING SHELVES FOR ONLY $9.99 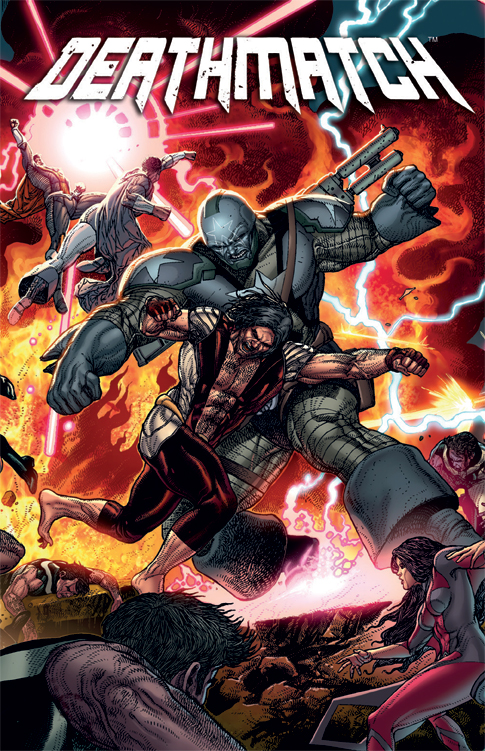 February 27th,  2012 – Los Angeles, CA – BOOM! Studios is proud to announce that the first collection of its highest debuting original property, DEATHMATCH, will arrive in stores on April 17th at the low introductory price of $9.99.
The superhero battle royale you can’t get from Marvel or DC! A powerful and mysterious supervillain has imprisoned the world’s greatest superheroes, forcing them to fight to the death until there is but one victor. It’s kill or be killed as we settle the score on all those hypothetical superhero match-ups in the ultimate DEATHMATCH. The mystery of who their captor is, what his ultimate motivations are, and why these heroes keep agreeing to the matches will drive readers from volume to volume! Written by industry legend Paul Jenkins (FAIRY QUEST, INHUMANS) and drawn by comics superstar Carlos Magno (PLANET OF THE APES, TRANSFORMERS), DEATHMATCH is a dark, psychological deconstruction of the superhero genre that can’t be missed. This hard-hitting, emotional first volume collects the first four issues of the smash hit comic series that introduces the audience to a brand new superhero universe they won’t be able to get enough of!
But don’t take our word for it, here is what reviewers are saying about DEATHMATCH:
“How to do it right” – Bleeding Cool “DEATHMATCH is not only good, but far better than I ever expected” – Comic Book Resources
“Picking up the first issue was a no-brainer” – Ain’t It Cool News
“Boom’s next breakout series” – Comic Vine
DEATHMATCH VOLUME 1 trade paperback ships with a cover by Carlos Magno under Diamond order code FEB130865. The trade paperback carries an introductory price of $9.99 and collects DEATHMATCH #1-#4.
About BOOM! Studios Founded by Ross Richie, 2009 and 2010’s “Best Publisher” BOOM! Studios (www.boom-studios.com) generates a constellation of bestselling Eisner and Harvey Award-winning comic books and graphic novels with the industry’s top talent, including Dan Abnett and Andy Lanning’s HYPERNATURALS, new HELLRAISER comics written by Clive Barker, PLANET OF THE APES, and Sam Humphries’ HIGHER EARTH. BOOM!’s all ages imprint KaBOOM! publishes Charles Schulz’ PEANUTS, Jim Davis’ GARFIELD, Cartoon Network’s ADVENTURE TIME, and 20th Century Fox’ ICE AGE. KaBOOM! recently won an Eisner Award for its first original series Roger Langridge’s SNARKED. BOOM!’s lit comix-focused imprint, BOOM! Town, won an Eisner Award for its first book, Shannon Wheeler’s I THOUGHT YOU WOULD BE FUNNIER, and just released SPACE DUCKS, the first comic book from indie musician legend Daniel Johnston.
Tags: BOOM! Studios, Carlos Magno, deathmatch, Paul Jenkins

2 thoughts on “DEATHMATCH VOLUME 1 HITTING SHELVES FOR ONLY $9.99”