You’re part of everybody, right?

If you aren’t, you probably need to click on that link.  If you are, you’ve already clicked it.

You Love Me, You Really Love Me…Deadpool is the Must See Hero of 2009!

Critics and fans alike finally realize that I, Deadpool, the crimson comedian, the merc with a mouth, the crazy guy with guns, am a smash hit!  My issues sold out in Deadpool: Suicide Kings, with art by Carlo Barberi and written by the very talented Entourage writer, Mike Benson (Me and Johnny Drama would make an awesome team, not now, I’m praising myself). My one-shot sold out in Deadpool: Games of Death, written by Mike Benson (Man, this guy loves me, shhh!), and art provided by the stylish Sean Crystal.  My issues sell out in my ongoing series which features art from Paco Medina (As if I’m hard to draw with a figure like this…well played) and the compelling, thrilling, shocking, no-holds-barred writing of… ( Daniel Way) Daniel Way !  Basically, my Marvel minions, I’m your savior; you love me, and want me featured in every single comic (Like Wolverine?)  I’m even going to star in my own movie (Bruno?  No!).  You know what, Marvel Universe, I love you too (Me too!).

See what everyone is saying about your idol, Wade Wilson:

“[Deadpool] is my favorite current Marvel title.  [Deadpool] is a shot of chaos, an injection of levity that keeps the comic book fan in us honest.” – Jay Tomio, Bscreview.com (He said that…about me. ‘sniff’)

“If you haven’t been following Deadpool, you should really be ashamed of yourself…Few mainstream comedy comics have ever been this clever and funny.” – Steven M. Bari, Comicsbulletin.com (You heard him, be ashamed!)

“Combined with great writing, Deadpool is one of the few books I really still look forward to.” – Scott A. Williams, Comixtreme.com (Awww)

Marvel and I urge (or threaten) retailers to check their orders on all Deadpool related issues, as they continue to generate significant praise and quick sell outs.  What is my next target in the Marvel U?  Will I ever get paid, seriously?  Catch me in all my spandex glory as I ravage the Marvel landscape in Deadpool #12 and Deadpool: Merc with a Mouth #1 (Which both will probably sell out…totally)!

P.S. Black Widow, I’m completely booked until this weekend, then it’s me and you babe (Ahhh yeaaa)! 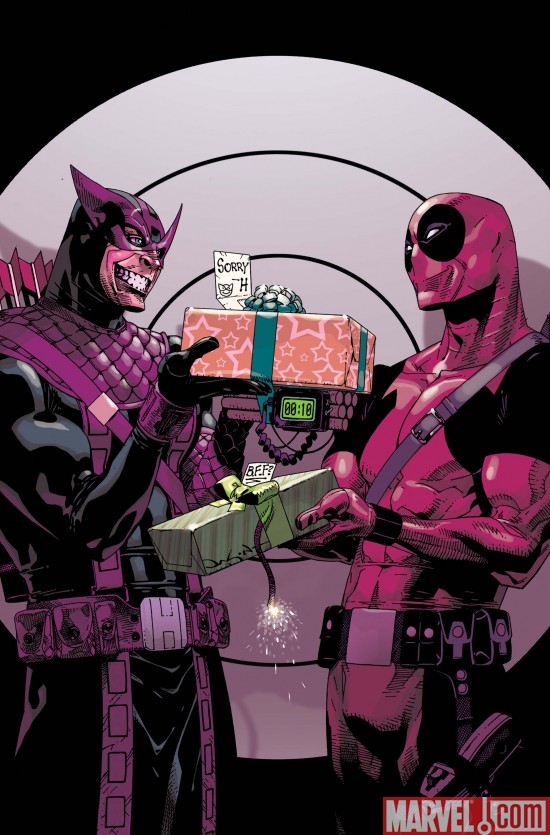