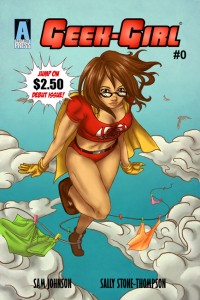 Cult favorite Geek-Girl gets a New Edition of her Zero issue this week from Actuality Press!

When ‘Little Miss Popular’ Ruby Kaye lands a pair of super-tech glasses – invented by brainiac college geek Trevor Goldstein – in a game of Strip Poker, she’s granted flight, super-strength, and – due to a flaw in the glasses’ programming – super-klutziness!

And this is just the beginning of the changes the glasses will wreak on Ruby says creator/writer Sam Johnson (The Almighties, Cabra Cini: Voodoo Junkie Hitwoman); “The tech in the glasses that college chick ‘It Girl’ Ruby selfishly gets a hold of will have a profound effect on her – altering the very ways she thinks and acts. And ‘wreak’ is an appropriate choice of word, as the majority of her ‘cooler-than-thou’ clique ain’t gonna be too impressed with the changes the specs bring about in Ms. Kaye…

“As Ruby, she hangs with the Maine in-crowd, is top of the party-invite list, and has guys queuing up. As Geek-Girl… not so much.” Although on the surface of it this might not seem like exactly the best thing to ever happen to Ruby, ‘surface’ is another appropriate word choice, Johnson continues: “How Ruby adapts to her new-found powers and their clique-alienating effects just might be the making of her – as she learns that with great glasses comes great responsibility and that, ‘geek-chic’ aside, being truly geeky can be truly sexy!”

That’s the social side of things, though – if there’s a super-heroine, there must be super-villains! “There certainly are,” continues Sam, “Geek-Girl is going to find herself smack bang in the middle of Maine’s tights ‘n’ capes scene in a way that she’s really not ready for. Both Super-villains and super-heroes will have significant roles to play in the mini-series that Geek-Girl #0 sets up, and the bizarre villain Mr. Mash-Up [who’s introduced in the issue] has a way to hit Geek-Girl very close to home – right where it hurts!

Geek-Girl #0, written by Sam Johnson, illustrated by Sally Stone-Thompson and published by Actuality Press is available now, priced $2.50 at www.samjohnson-comics.blogspot.com