Chris listens to the new Gorillaz album. Is Plastic Beach safe to surf?

Gorillaz is one of those bands you can’t wait for a next album from. They’re not
even an alternative group of any genre-just alternative because they take on any
type of music and do it well. I was beyond happy when I found out they were coming
out with another album and like Demon Days, I was curious what the title stood for.
Gorillaz does a phenomenal job at storytelling and it’s amazing how they switch from
another genre to the next without ruining the concept.

The album starts off with a soft orchestral intro. This is the actual title of the
first track of the album but it’s actually a preview of the iTunes and Japanese
bonus track "Pirate’s Progress". I’ve listened to it and it’s definitely the most
stood-out track of the album if you include it. A lot of listeners won’t be
surprised by these tracks of orchestra but the band can do it and did.

Now what I believe is the honest intro is "Welcome to the World of the Plastic
Beach" featuring more surprising than "Orchestral Intro", Snoop Dogg! It’s safe to
say he’s one of the most known musicians ever to be on a Gorillaz album. I
personally aren’t much of a fan of Snoop’s latest work than his ’90s work like
Doggystyle and early 2000s material but he had it down pat on this track. I’ve never
heard him flow this smooth like this-some may think he would ruin anything that had
to do with Gorillaz but prepare to eat your words. I love the westside styled
synthesizers included and this song is definitely one of the highlights of Plastic
Beach.

Next is "White Flag" featuring British rappers, Bashy and Kano. But the what steals
the song is the Arabic intro and background-if Music of Lebanon wasn’t involved,
this would a mediocre track. I have no idea who this rappers are but I believe it’s
safe to say it’s a shame we don’t here hip-hop like this much.


"Rhinestone Eyes" is track with 2D singing alone. It’s kind of hard to explain this
song except theirs nothing bad to say about it. It’s in no way a filler on the album
and a "rhinestone" (no pun intended) of the album.

Plastic Beach’s 1st single, "Stylo" featuring Mos Def and Bobby Womack comes along.
It’s one of those tracks like Demon Days where you have to listen to a few times to
love it. It’s not a song for the clubs but it’s also not one to be on Billboard’s
Hot 100. With that said, once you see the music video, you’ll love this 5x more than
before but all of Gorillaz videos would win you over anyway.


The album’s 2nd single is "Superfast Jellyfish" featuring De La Soul and
Gruff Rhys. This song is as humorous as to think rappers would talk about things
like this. This track is pretty much about crappy food with silly (yet not
unnecessary) voice-overs like the laughing on "Feel Good Inc." The beat really makes
this a feel good (no pun intended but I didn’t even see that coming) and happy tune.
I’m curious how this will perform on the charts but the music video won’t
disappoint, I’m sure of.

"Empire Ants" featuring Little Dragon…wow-I can’t explain how I feel of this being
the #1 track off the album. The song starts off with a calm and quiet combination of
acoustics and 2D softly sings. As he begins, the song puts you in a trance (be sure
to listen to this with quality speakers or headphones!) and after 2 minutes it
sounds like you’re rewarded letting yourself go. You’re treated to a chorus from
Little Dragon and a whole other beat that takes you to another world. Don’t be
surprised if you repeat this a few times after while turning up the volume.

"Glitter Freeze" is a pure electronica track that even though I hate to admit it
started to sound like Christina Aguileria’s "Keeps Getting Better". I mentioned this
on YouTube and some people believed it was an insult and that Murdoc would "kill me
in my sleep". It’s NOT an insult, in fact it proves that everything reminds someone
of something-it’s been done before and in this song’s case, it keeps getting better
(again, no pun intended-kind of ironic, correct?).


"Some Kind of Nature" featuring Lou Reed is a guaranteed "toe-tapper" and
"head-nodder". You’ll be reciting the chorus every time and Lou Reed does a good job
making this a very catchy song. You’ll try to figure out Murdoc’s meaning
(especially with the stuttering) but that’s one of the reasons that makes this a fun
track.

"On Melancholy Hill" reminds me of an ’80s inspired song. It’s just a chill-out
track and like "Rhinestone Eyes", you can’t be mad it. Doing that would be like
booing a kindergarten school play. There’s just some things Gorillaz do that just
can’t be explained and this isn’t a bad thing either.

"Broken" is one of my favorite tracks off Plastic Beach. It’s another chill-out
track with an awesome chorus. Speaking on the chorus, you’ll notice a little
auto-tune used but it doesn’t ruin the song in any way, just adds the psychedelic
song it already is.

Here’s another track with Mos Def titled "Sweepstakes". I like to compare this to
"White Flag" except instead of an Arabic band stealing the song from the get-go, Mos
Def gets robbed by the Hypnotic Brass Ensemble near its end! It’s quite ironic but I
love how Gorillaz adds more to rap that depends on electronic most of the time.

Now we reach the track of the same title, "Plastic Beach". Other than "Orchestral
Intro", this would be the most stood-out song on its album. I honestly don’t know
what genre to put next to this…let’s call it mana. Mana is stands for, "not know
what it is" but this tune isn’t as weird as I may sound like it is-it’s genius.

"To Binge" is another track featuring Little Dragon. I love the trademarked guitar
tune you’d hear on a lot of beach inspired songs. This is a laid-back song that
though you’ll love it, you’ll also notice something I’ll mention along with others
in the last part of this review.

"Cloud of Unknowing" is another track with Bobby Womack. I’ll say this is the best
way to hear him on a Gorillaz track than on "Stylo" which is still art. I’ll also
say he’s a most interesting star of all the guest of Plastic Beach. I’d like if this
was the last track of the album but it isn’t.

"Pirate Jet". Pire-jet, pire-jet, pir-jet. Fun tune but I wish it was before "Cloud
of Unknowing" so it would make sense of taking a "pirate jet" TO a "cloud of
unknowing". I’d say either Gorillaz knew what they were doing or this is a flaw in
the track listing.

Well, everyone-that’s the end of Plastic Beach. Gorillaz’s self-titled album was the
most alternative aka best, Demon Days was the darkest aka experimental and this is
the most electronic in between the first two with the absence of Noodle and even
though I’ve heard some acoustic drums, Russel Hobbs is missing in action also. I
thought Noodle was the female singer of tracks "Empire Ants" and "To Bing" but
sadly, is not. But you know what the best thing is? We’ll be treating by the amazing
storytelling in the music to come. I admire the more electronic sound’s reason is
for the concept of the band members-if that’s not awesome, I don’t know what is.
Plastic Beach succeeds now on the the next one!

5. Welcome to the World of the Plastic Beach

On Melancholy Hill, Superfast Jellyfish, Glitter Freeze, Some Kind of Nature and
Sweepstakes. 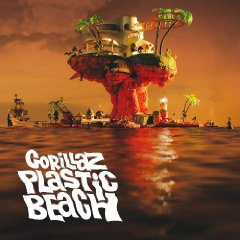 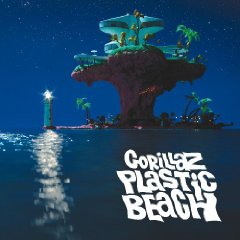