In ENORMOUS, a new Image Comics/Shadowline graphic novella by Tim Daniel and Mehdi Cheggour (Heavy Metal) to be published in July, a cataclysmic ecological event has spawned colossal beasts that overrun human civilization. Cities are reduced to ruins where survivors must scratch out a desperate existence, evading the giant creatures that hunt them.

In the midst of this struggle against annihilation, a young woman who has lost everything, Ellen Grace, braves the rubble-strewn streets to find lost children and bring them to a safe place. However, she soon finds that there is another enemy just as dangerous as the megafauna: other humans.

“By the time we enter the world of Enormous, being at the bottom of the food-chain is something humans have been experiencing for a while,” said Daniel in an April interview with Comic Book Resources. “As a result, there is no consensus around how we’re going to survive as a species.

“There are a few human factions, each operating with a fairly distinct agenda, the motivations of which may well be far beyond their understanding,” he added. “Regardless of what might prove to be the driving force for each character, the law of the land is simple: hunt or be hunted.”

Published under Image’s Shadowline imprint, ENORMOUS can be pre-ordered from the May issue of Previews (MAY120519) and is scheduled to be in stores on July 5. It has been supported by a campaign of “teasers” that appeared on top comic book sites such as Comic Book Resources, iFanboy, and Multiversity, a “prequel” and article published at USA Today, and a preview at the Gawker site io9. 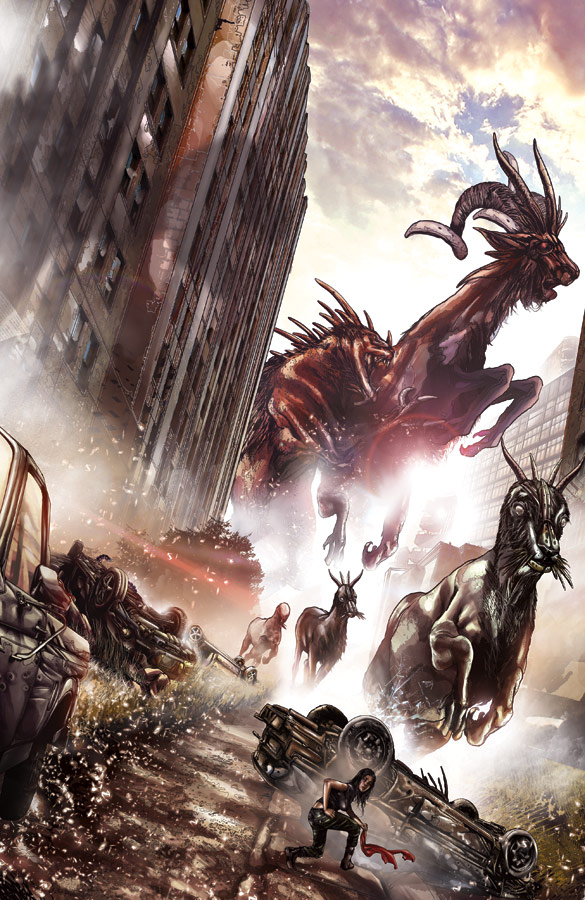 1 thought on “HUMANS ARE AN ENDANGERED SPECIES IN ENORMOUS”