DINOBOTS enter the TRANSFORMERS PRIME world for the first time ever!

In the days leading up to the events of Activision and High Moon Studios’ TRANSFORMERS: FALL OF CYBERTRON video game, we see the origin of the fearsome DINOBOTS as they encounter a secret DECEPTICON plot and take on a slew of enemies including SHOCKWAVE and the INSECTICONS!

“It’s a lot of fun to have a chance to play in the sandbox of the Fall of Cybertron game. I’m lucky enough to get to write one of our Transformers ongoing comics, and edit the rest, but doing these stories in this setting… well, it’s a real blast!” said writer JOHN BARBER.

BARBER continued “I sat down with Dave Cravens, the head writer of the game at High Moon Studios, and we plotted out the whole comic one afternoon. It was great to get to work that closely with somebody so intimately involved in the game, so we could really make sure this comic actually fits in with the story the game is telling–and plays into the larger TRANSFORMERS mythology. Plus, anybody who knows me knows I love me some Dinobots, so it was a thrill to get to write them!”

The series will run for six digital-only installments on a bi-weekly schedule, and will be available all digital platforms including Apple iOS, Android, and online. 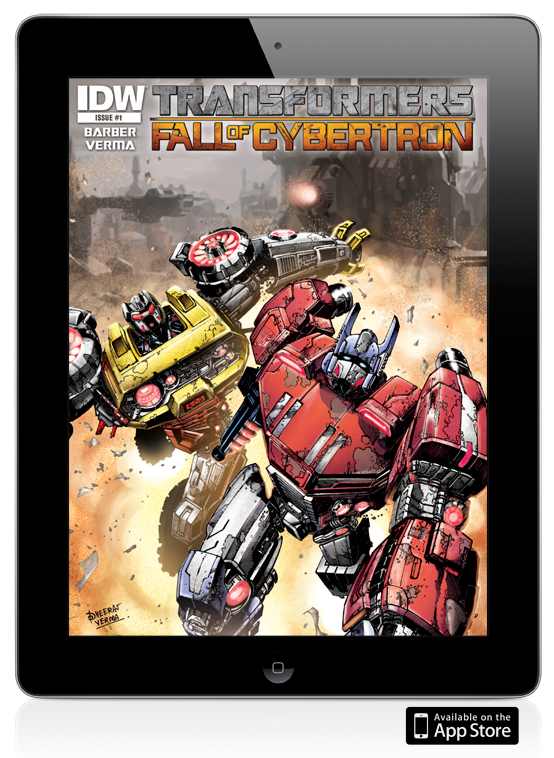 TRANSFORMERS: FALL OF CYBERTRON ($0.99, 8 pages; full color) will be available in August in IDW’s Apple iPad™, iPhone® and iPod touch®, apps – Transformers Comics and IDW Comics, and on the Web at read.idwpublishing.com. The series will also be featured in the Comics by comiXology platform for iOS, Android, Web and Kindle Fire, and Comics + by iVerse.

Visit IDWPublishing.com to sign up for updates and learn more about the company and its top-selling books.

About IDW Publishing IDW is an award-winning publisher of comic books, graphic novels and trade paperbacks, based in San Diego, California. Renowned for its diverse catalog of licensed and independent titles, IDW publishes some of the most successful and popular titles in the industry, including: Hasbro’s The TRANSFORMERS and G.I. JOE, Paramount’s Star Trek; HBO’s True Blood; the BBC’s DOCTOR WHO; Nickelodeon’s Teenage Mutant Ninja Turtles; Toho’s Godzilla; Wizards of the Coasts Magic: The Gathering and Dungeons & Dragons; and the Eisner-Award winning Locke & Key series, created by best-selling author Joe Hill and artist Gabriel Rodriguez. IDW is also home to the Library of American Comics imprint, which publishes classic comic reprints, and Yoe! Books, a partnership with Yoe! Studio.

Hasbro, Inc. (NASDAQ: HAS) is a branded play company providing children and families around the world with a wide-range of immersive entertainment offerings based on the Company’s world class brand portfolio. From toys and games, to television programming, motion pictures, digital gaming and a comprehensive licensing program, Hasbro strives to delight its global customers with well-known and beloved brands such as TRANSFORMERS, LITTLEST PET SHOP, NERF, PLAYSKOOL, MY LITTLE PONY, G.I. JOE, MAGIC: THE GATHERING and MONOPOLY. The Company’s Hasbro Studios develops and produces television programming for markets around the world. The Hub TV Network is part of a multi-platform joint venture between Hasbro and Discovery Communications (NASDAQ: DISCA, DISCB, DISCK), in the U.S. Through the company’s deep commitment to corporate social responsibility, including philanthropy, Hasbro is helping to build a safe and sustainable world for future generations and to positively impact the lives of millions of children and families every year. It has been recognized for its efforts by being named one of the “World’s Most Ethical Companies.” Learn more at www.hasbro.com.  © 2012 Hasbro, Inc. All Rights Reserved.