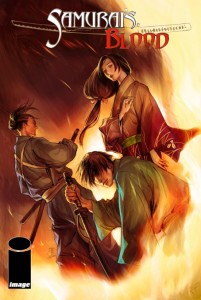 “In an era when lineage defined you, three teenagers must make their way through the world hiding their identities in order to find their destinies. As their village burns behind them, they are headed for a city they’d heard about only in stories. The three young samurai must now struggle to stay alive and take vengeance on the evil usurper who has destroyed the rest of their clan and the only world they’d ever known. Will they rise on the tides of vengeance, or will they fall on the swords of fate?”

SAMURAI’S BLOOD (from Image Comics and Benaroya Publishing) promises to be an exciting ride which offers not only action and adventure but a true and honest exploration of the code of honor that defined the Samurai culture.

Owen Wiseman writes graphic novels, screenplays, and prose. Raised by hippies in the Pacific Northwest, Owen loves history, philosophy, mythology, technology, and most -ologies, really. Owen has a degree in Philosophy from Pomona College in sunny Claremont, CA, and would like to get a dog but his apartment manager is some sort of animal-hater.

Nam Kim is a Philadelphia-based artist, founder and director of Studio Imaginary Lines, an all-purpose design house which produces original content for comic books, video games and commercial advertising. Nam is a self-taught illustrator who credits artists such as Burne Hogarth, Jim Lee and Masamune Shiro for shaping his artistic style and vision.

Matt Dalton is a sequential artist and concept illustrator who has worked in comics, children’s books, video games and film.  In 2003 he graduated from Savannah College of Art and Design with a Bachelors degree in Sequential Art. Matthew enjoys historical biographies as well as philosophical studies and is an amateur bodybuilder.  His greatest inspirations are Norman Rockwell, Frank Frazetta, and Mike Weiringo. He currently lives in Sewell, NJ with his wife and son.

Jo Chen is best known for her work as the cover artist for BUFFY THE VAMPIRE SLAYER, RUNAWAYS, STREET FIGHTER series, STAR WARS, THOR, NEW AVENGERS, HELLBOY and more. She has also ventured into working interiors – penning Wildstorm’s RACER X mini-series and Dreamwave’s DARKMINDS MACROPLIS. Jo’s seinen manga, THE OTHER SIDE OF THE MIRROR, was re-published in English by TokyoPop.

Founded in 2009 by Michael Benaroya, Benaroya Publishing is a company dedicated to the creation and cultivation of intellectual property by focusing on thrilling and compelling storytelling. Based in Los Angeles, California, Benaroya Publishing launches their debut titles this Spring under the Image Comics label. With David Elliott (FALL OUT TOY WORKS and co-founder of RADICAL PUBLISHING) at the helm as in-house Editor-in-Chief, Benaroya Publishing promises to bring fresh new ideas, and uniquely told stories to the comics literary world.