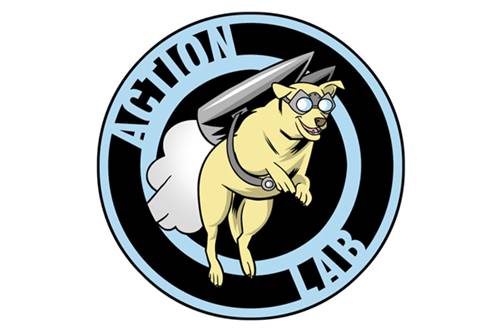 Effective October 1, 2012, Kevin Freeman has been named the new President of Action Lab Entertainment.  He replaces Shawn Pryor, who has served as President since the publisher’s inception in 2010.

Pryor will remain an integral part of the Action Lab team.  He will focus his efforts on building the digital side of comic production and serve as the primary contact to ComiXology, Comics Plus, Graphic.ly, and other digital outlets for Action Lab’s wide range of titles.  He’ll also serve as Action Lab’s web admin and be a facilitator for special projects.

In the almost two years that Pryor served as president, Action Lab went from a small unknown publisher to an award-nominated, and award winning, company.

“An administrative shift was needed to ensure that the future of Action Lab was maintained as it continues to grow,” explained Pryor.  “As we expand, our staff needs to expand as well.  We need to be able to spread out responsibilities, and that’s where Freeman comes in.  Now is the time to let someone else take the company further.”

Freeman brings with him a myriad of editorial and administrative experience, having served as the Managing Editor for comics publisher Ape Entertainment from 2005 to 2012.  He also served as interim Editor-in-Chief at Ape in 2009.  He joined the Action Lab team as Managing Editor in June 2012.

“I’m really excited to serve as Action Lab’s new president, and humbled that they are giving me this opportunity,” said Freeman.  “The upside of this company is limitless.  Given our early success, our recent acquisition of the Vamplets license, and a number of other huge projects that we can’t talk about yet, Action Lab is going to be on the publishing map for years to come.  We are doing amazing work here.”

Action Lab received two Eisner nominations in 2012 for its critically-acclaimed all-ages comic Princeless, and has been praised for its diverse library of titles, including Double Jumpers, Fracture, and The Order of Dagonet.