Secret Warriors has recieved some nice critical acclaim since it was release a little over a week ago.

Check out a little Secret Warriors as a new printing makes it’s way to a store near you!

That’s right True Believers, Nick Fury has returned and with him, the next generation of Marvel super heroes to take on the Dark Reign! Marvel is pleased to announce that Secret Warriors #1 has sold out at Diamond and will be going back to press with Secret Warriors #1 Second Printing Variant with a new cover featuring the stunning interior art and ubiquitous trade dress! The masterpiece, written by acclaimed scribe Briand Michael Bendis & rising star Jonathan Hickman, penciled by Marvel Young Gun artist Stefano Caselli, brings a new kind of super hero to the Marvel U under the guidance of the world’s greatest spy! It’s super-heroics like you’ve never seen before with non-stop, heart pounding action and a mind-blowing ending that will change everything you thought you knew about the Marvel Universe!

Fans and critics agree: Secret Warriors is a series you can’t miss!

“Hickman is the next Warren Ellis, the next Alan Moore…seriously, I think this guy is pretty awesome” – Blair Butler, G4 TV’s Fresh Ink Online

“Caselli is able to convey a wide range of emotions with his facial expressions. His action sequences are energetic and dynamic, and his visual style in general just oozes personality. With a stellar writing team stoking his engines, Caselli promises to become one of the biggest names in the industry once this book takes off. And it will.”– Dan Phillips, IGN.com

“A great Marvel debut for one of the best writers to come out of comics in recent years which marries Hickman’s design sensibilities with a rip roaring spy tale.” — Dan Hill, ComicsBulletin.com

“Secret Warriors #1 ends on a cliffhanger revelation strong enough to bring you back next month, but be warned: it’s a real doozy”—James Hunt, ComicBookResources.Com

Marvel urges retailers to check their orders on Secret Warriors and all other Dark Reign tie-ins as the Marvel Universe continues to evolve, and when Norman Osborn is in charge, there’s no telling what can happen next! Don’t miss Secret Warriors #1 Second Printing Variant! 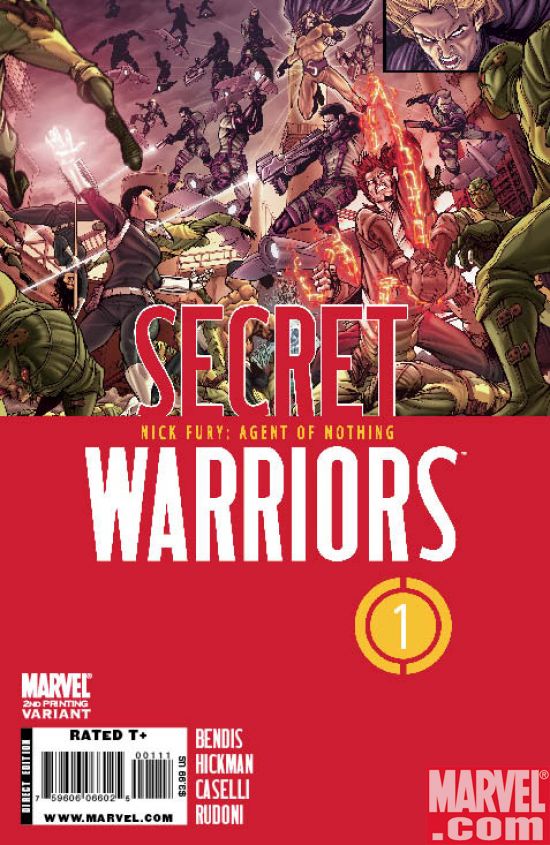