Cartoon Network is putting Marvel’s Super Hero Squad right in the thick of it with a prime time slot. 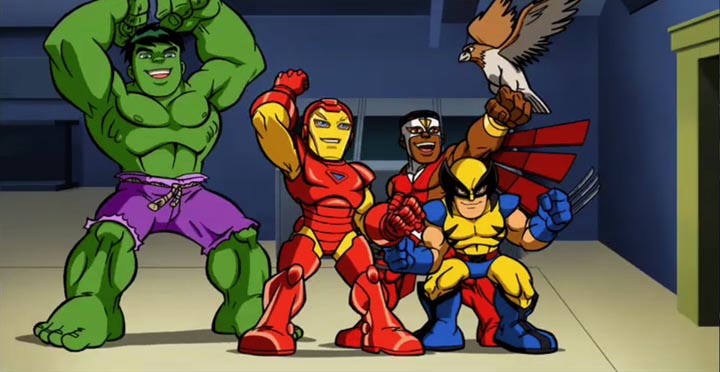 MANHATTAN BEACH, CALIFORNIA (November 9, 2009) – On Saturday morning, September 19th, The Super Hero Squad Show burst onto television screens across the nation on Cartoon Network to rave reviews and a huge audience.  It instantly became the Network’s  #1 show for Boys 6-8 and has continued its heroic growth in that demographic, increasing that audience by nearly 30%.

Thanks to the tremendous success the show has seen on Saturday mornings, the greatest Super Heroes in the Marvel Universe are ready to make the leap to primetime! Starting this past Saturday, November 7th, The Super Hero Squad Show made its heroic debut on Saturday nights at 7:30PM as part of Cartoon Network’s incredible prime time line-up.

Check out your favorite Marvel Heroes — including Iron Man, Wolverine, Hulk, Thor, Silver Surfer and Falcon — as they fight to save Super Hero City from Dr. Doom’s team of villains… and have a few laughs along the way!  Can’t get enough of this action-packed comedy series?  Fear not, The Super Hero Squad Show will continue to air weekdays Monday through Friday at 8:30AM.

When the greatest (and coolest) heroes on the planet unite to face the world’s greatest villains, you get the biggest, most family-friendly Super Hero team-up in TV history. It’s no small job protecting Super Hero City from the wild, weird (& even wacky) villainy of VillainVille’s infamous baddies… but the Super Hero Squad is always up for the job. These brave heroes totally deliver the action – but with plenty of humor on the side.

Monday through Friday at 8:30AM