Skip to content
Mark Sable and Salgood Sam are bringing their latest project, DRACULA: SON OF THE DRAGON to kickstarter. They sent the following  information. Check it out, won’t you?
DRACULA: SON OF THE  DRAGON PRESS RELEASE
FOR IMMEDIATE  RELEASE:
April  1st, 2013
WHAT IS DRACULA:  SON OF THE DRAGON:
The most exciting  new independent comic is not coming from Marvel, DC or even Image.  Instead, two creators with works in print  from nearly every publisher have decided to self-publish and are seeking fans  help to do it.  DRACULA: SON OF THE  DRAGON is a new Kickstarter from two high-profile indie creators.
http://www.kickstarter.com/projects/78669939/dracula-son-of-the-dragon
Created by writer  Mark Sable (TWO FACE: YEAR ONE; GRAVEYARD OF EMPIRES) and artist Salgood Sam  (THEREFORE REPENT, SEA OF RED, Warren Ellis’ GHOST RIDER 2099), DRACULA: SON OF THE DRAGON  serves as a prequel to Bram Stoker’s DRACULA.   Part historical fiction, part horror fantasy, it chronicles the transformation of Vlad  Dracula from Impaler to vampire Count.
WHY  KICKSTARTER?
Why has Sable,  whose recent work includes Image’s GRAVEYARD OF EMPIRES and Boom! Studio’s  UNTHINKABLE – both of which have been optioned as for film production, with  Sable writing the screenplay for the former – chosen to go the Kickstarter  route?
“With comics  becoming an increasingly disposable medium, we wanted to create something  unique.   Not just a collectors item – although our print editions will be exclusive to Kickstarter backers – but an  artifact,” said Sable.  The two most  popular incentives are hand bound leather and leatherette editions, designed to  evoke the kind of tome that one might have found in Vlad The Impaler’s  time.
Sable and Salgood  also wanted to involve the readers in the process of creation.  “All backers will receive access to an  exclusive behind the scenes ‘making of” blog.   But we’re also literally offering a readers a chance to be a part of the story”, noted Salgood, who is drawing cameo appearances for select backers.
Backers can have stories created for themselves.  Sable, who  will be teaching at SVA’s new visual narrative MFA program, is offering script  evaluations. He’s also agreed to write the first chapter of a very generous  backer’s graphic novel, which Salgood will provide the cover for.  Both Sable and Salgood have created custom  pledge tiers at backers requests, and will continue to do so.  Prospective backers are only limited by their  imagination.
A little over a week into the drive, backers seem to be responding.  DRACULA: SON OF THE DRAGON has reached one third of it’s  goal.
HOW DO WE KNOW  SABLE AND SALGOOD WILL DELIVER?
The success of  Kickstarter projects like The Veronica Mars movie shows that Kickstarter has  some life on it.  But some worry that  corporations like Warner Brothers will crowd out more independent projects.  Others worry that many comics projects still  remain unfulfilled despite reaching their goals months ago.
Salgood Sam feels  confident that they’ll get the book in backers hands in plenty time.  “I’ve been self-publishing for a long time,  most recently with my autobiographical comic Dream Life.” Serialized in his quarterly  REVOLVER anthology after a successful Indiegogo fundraiser, it has consistently  been on time.  Salgood points out they’ve  been “conservative” in what they’ve asked for and how much time they’ve asked  for completion and delivery.
The goal of the  Kickstarter is to fund the creation of the first of four DRACULA: SON OF THE  DRAGON graphic novels, the first of which will be available in 2014.  But 10-15 page  chapters will be released through Salgood Sam’s revolver, available digitally or  in print as early as July of 2013.
WHY DRACULA?

Is there room for  another vampire comic?  “I was asked the  same question about zombies with GRAVEYARD OF EMPIRES”, Sable said, referring to  his sold out Image mini-series about Marines and Taliban teaming up to take down  zombies in Afghanistan.  “They are both  incredibly powerful metaphors, much like superheroes.  In GRAVEYARD, the zombies were representative  of the unstoppable forces of an unseen insurgency.”
In DRACULA: SON  OF THE DRAGON, Sable and Salgood mine vampirism as a way of extending life, an  addictive drug and an ancient weapon of mass destruction, spreading a vicious  plague.  Just as GRAVEYARD was known for  extensive research and edgy political relevance, so is DRACULA: “It may be set  over 500 years in the past, but SON OF THE DRAGON deals with a misguided war  against Islam, with terror used as a weapon on both sides.”  Sable compares it to 300 and FROM HELL in  terms of historical fiction.
But there’s still  plenty of room for the fantastic.  “Bram  Stoker was very vague about how Dracula became a vampire,” Sable points out, but  adds “there are clues.” One such clue is The Scholomance, which Sable describes  as a legendary school of dark magic, a kind of “Evil Hogwarts”.  Sable is surprised no one has picked up  Stoker’s hints, but is thrilled to have the chance to offer a unique take on  Dracula that’s faithful to both history and the novel.
HOW CAN I LEARN  MORE ABOUT DRACULA: SON OF THE DRAGON
The Kickstarter  page for this project – a “staff pick” is located at http://www.kickstarter.com/projects/78669939/dracula-son-of-the-dragon
In addition,  Salgood Sam maintains a Facebook page at http://www.facebook.com/DraculaSonoftheDragon
Mark Sable has been updating his website – marksable.tumblr.com – daily with inspiration for the series, a preview of the  backmatter included for the book.
Both can be reached on twitter at @Marksable &  @Salgood, and press inquiries can be directed to draculasonofthedragon@gmail.com
For those in the Los Angeles area, Mark Sable will be hosting a LIVE event in  conjunction with The Original Drink and Draw Social Club on Thursday, April  11th 2013 from 8PM onward at Casey’s Irish Pub in Downtown LA.  Artists professional and  amateur alike are welcome to drink and, well, draw their own versions of Dracula  for a chance to appear as pinups in the book alongside guest artists such as Paul Azaceta, Nathan Fox and Robbi Rodriguez (and more).  Sable will live-tweet any art created at the Drink and Draw event, and more importantly, buy as many drinks for contributing artists as he can afford. 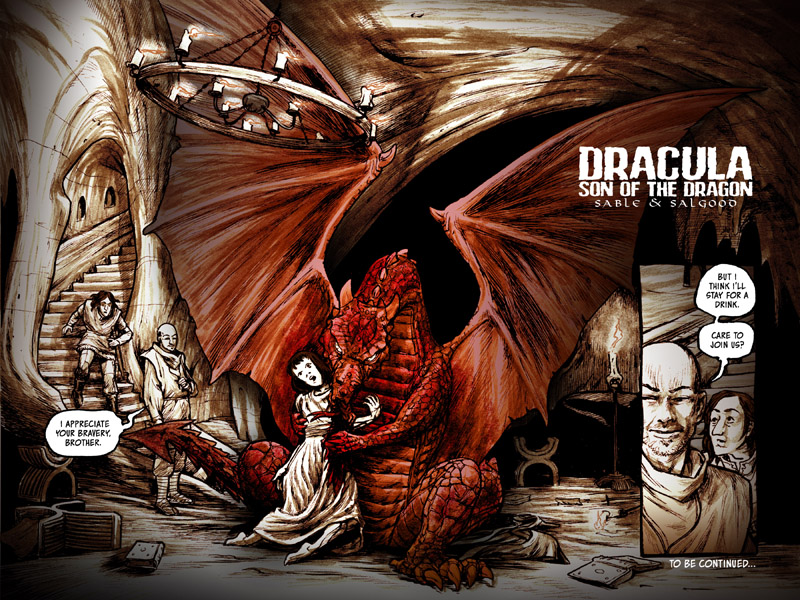