Scarlet #1 Sells Out And Returns With Second Printing!

Scarlet #1 Sells Out And Returns With Second Printing!

After an overwhelming debut, Scarlet #1 has sold out at Diamond (though copies may still be available at the retail level) and will return with Scarlet #1 Second Printing Variant! The award-winning, megastar team of writer Brian Michael Bendis and artist Alex Maleev bring readers the comic experience of the year! Scarlet is the story of a woman pushed to the edge by all that is wrong with the world. After witnessing the corruption and failings of the society in which she lives, Scarlet decides to take a stand and fight for what is right! Jam-packed with suspense, drama, action and intrigue, Scarlet #1 Second Printing Variant has got something for everyone. Get in on the ground floor of the first creator-owned series by Bendis since Powers and the first creator-owned series by Maleev, with the debut of a fresh new character that already has everyone talking.

“On behalf of Alex and myself I would like to thank all the readers and retailers for making the debut of Scarlet one of the great moments of our lives,” explained Brian Bendis.  “We raise our glass to many more issues to come!”

Fans and critics alike can’t get enough of Scarlet #1!

“A great first issue… Scarlet has some stuff she wants to tell me, and I can’t wait to hear it.” – Johnny Destructo, Ain’t It Cool News

“Outside of works like Watchmen, Maus, and A History of Violence, ‘art’ is rarely used to describe comic books. This is exactly what Scarlet accomplishes.” – Ben Johnson, Mania.com

“Scarlet #1 is as close to a great indie film as a single comic book issue can come, with all of the blood, sweat and tears that go into making it laid out on the page.” – Ron Richards, iFanboy.com

What caused Scarlet to embark on this world-changing mission? How will she fight the injustices of a system that no longer cares about her? Find out in Scarlet #1 Second Printing Variant! This is the start of a new American Revolution! 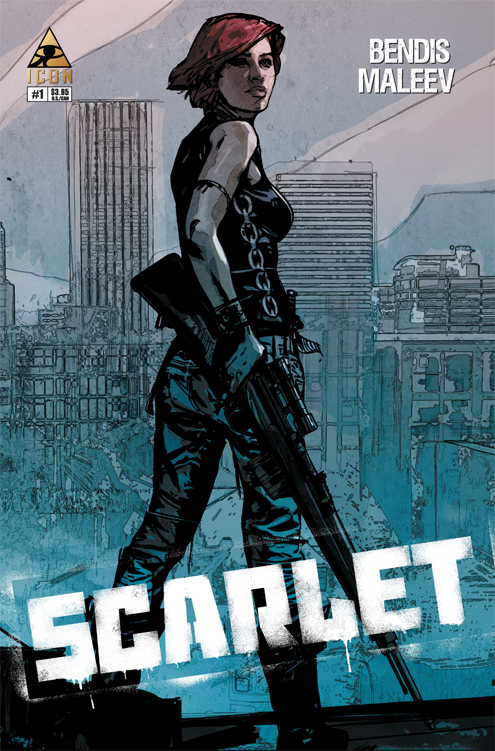