Looks like Ultimate Cap will be making some Ultimate Decisions to end the DIVIDED WE FALL crossover and kick off the UNITED WE STAND crossover in Marve’s ULTIMATE COMICS universe. Here’s the Press release:

The DECISION That Will Change The Ultimate Comics Universe FOREVER. 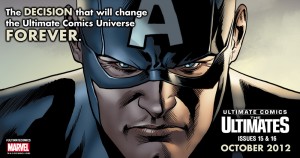