The last arc of the acclaimed horror series begins this November!

San Diego, CA (September 13, 2012) – As Thornton Wilder once said, “All good things must come to an end, but all bad things can continue forever,” a quote that seems eerily appropriate for LOCKE & KEY. While at times frighteningly dark and brutally violent, Joe Hill and Gabriel Rodriguez’s Eisner-winning series has also sailed on winds of high fantasy and elaborate mystery, striking a mesmerizing balance and attracting a fervent and dedicated audience. While new issues may cease to appear before too long, the unique and vivid memories will live on in fans’ minds and shelves forever.

“Locke & Key is the most fun I’ve ever had writing anything. It’s been a Catherine’s Wheel that throws off story possibilities instead of sparks and a part of me thinks I could live in Keyhouse forever. But I made a promise to the reader in the first issues, that one day ‘all doors would be opened,’ and that time is now,” said writer and co-creator Hill. “Time to open the door that leads to the end of our story and step through. Hopefully readers will like what’s waiting for them on the other side.”

After thirty-odd issues the decisive battle for Keyhouse must be fought; debts and spirits must be settled. LOCKE & KEY: Ω, beginning this November, is where the Locke family’s story, so masterfully begun in WELCOME TO LOVECRAFT, reaches its conclusion.

“Locke & Key has been a journey into pain, wonder, horror, magic, fear, courage, failure, love, hate, and hope. To get lost in this mythology and drama has given me the chance to develop visuals and narrative in a way I could never have imagined possible. Mostly because of the collaborative effort with best friends and artists with passion, creativity and insanity unleashed. Guys, what a ride!,” said artist and co-creator Rodriguez. “But we’ve always been heading to a conclusion that will finally see the light at the end of this last journey. I’m as eager and excited as any reader to open the last door, reveal the final mystery, and unveil the fate of our beloved characters. Be warned – unexpected turns and terrible surprises ahead!”

“We’re building toward a conclusion that Joe’s had in mind since WELCOME TO LOVECRAFT,” said Chris Ryall, IDW’s Chief Creative Officer/Editor-in-Chief and Locke & Key’s editor. “And while some of the story elements have shifted along the way, I can’t remember ever seeing a long-running series that’s had the complete story so fully developed from the start. I can’t wait for people to see it. But I recommend everyone pick up two copies of this series, since the issues are gonna end up stained with tears when readers see what’s going to happen to these beloved characters.”

“And, just because this is the end of the Locke family’s story doesn’t mean it’s the very end of Locke & Key,” Ryall added cryptically… 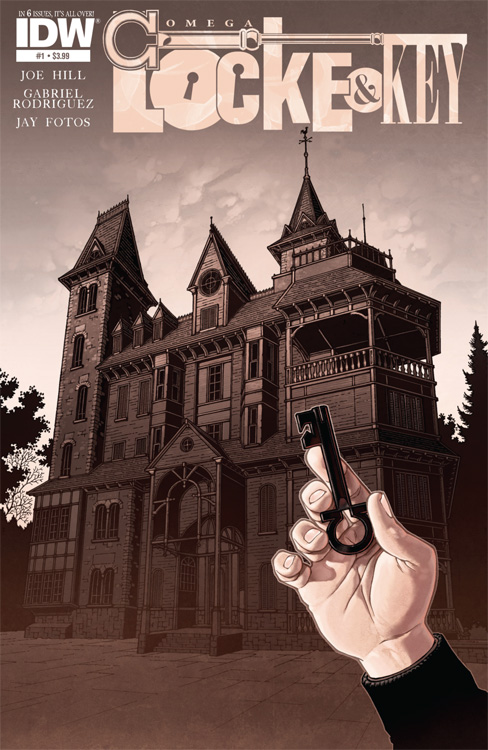 Visit IDWPublishing.com to learn more about the company and its top-selling books. IDW can also be found at http://www.facebook.com/#!/idwpublishing and http://tumblr.idwpublishing.com/ and on Twitter at @idwpublishing.

About IDW Publishing IDW is an award-winning publisher of comic books, graphic novels and trade paperbacks, based in San Diego, California. Renowned for its diverse catalog of licensed and independent titles, IDW publishes some of the most successful and popular titles in the industry, including: Hasbro’s The TRANSFORMERS and G.I. JOE, Paramount’s Star Trek; HBO’s True Blood; the BBC’s DOCTOR WHO; Nickelodeon’s Teenage Mutant Ninja Turtles; Toho’s Godzilla; Wizards of the Coasts Magic: The Gathering and Dungeons & Dragons; and the Eisner-Award winning Locke & Key series, created by best-selling author Joe Hill and artist Gabriel Rodriguez. IDW is also home to the Library of American Comics imprint, which publishes classic comic reprints, and Yoe! Books, a partnership with Yoe! Studio.