Superstars Cullen Bunn & Will Sliney Bring the Defenders to the Next Level! 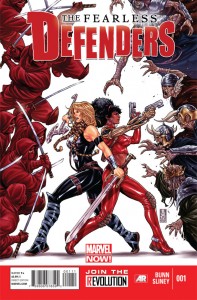 New York. NY—November 9, 2012— This February, the Defenders come together again in Fearless Defenders #1, kicking off the all-new ongoing series from the amazing creative team of writer Cullen Bunn (Venom, Sixth Gun, The Fearless)  and artist Will Sliney (MacGyver, Star Wars)! As part of Marvel NOW!, Fearless Defenders  joins a number of titles that will take the Marvel Universe in an exciting all-new direction, as the industry’s top creators join the top Super Heroes to deliver all-new ongoing series, great for new and lapsed readers alike!

Valkyrie trying to make amends for her mistakes—mistakes that put the entire world in jeopardy—is tasked with choosing a group of heroic women to fight by her side, not from the women of Asgard, but from the heroic women of Earth.  Circumstance will provide her with an unlikely partner in this task, as she is joined by private investigator Misty Knight. With very different points of view and very different approaches, they will both find their definitions of heroism and honor put to the test by the women they lead and the challenges they face.

“The Defenders has always been defined by a team roster that’s as unusual as the threats it faces, and we’re about to take it up several notches,” said Axel Alonso, Editor In Chief, Marvel Entertainment.  “Whether, your problem is nasty Ninjas, murderous trolls or shambling zombies, there’s no one better suited to defend you that this all-new, all-female team.”

Marvel NOW! is the culmination of Marvel ReEvolution, the groundbreaking new initiative to evolve the comic book experience through innovation. With Fearless Defenders, Marvel NOW! ensures fans will discover an entirely new perspective in the adventures of the Defenders.

“Fearless Defenders will chronicle the adventures of the female heroes of the Marvel Universe. There will be a central team of characters that will form over time, but the cast will rotate to some degree from arc to arc. This will be a team like none other in Marvel NOW,” said writer Cullen Bunn in an interview with Marvel.com. “I think readers will have a good time speculating on who will be joining this version of the Defenders. The team up of Valkyrie and Misty Knight is probably unexpected for most people, and that’s just one of the surprises I have in store. This will be an offbeat team, and they’ll be facing some bewildering threats.”

Each issue of Fearless Defenders features special augmented reality content available exclusive through the Marvel AR app – including cover recaps, behind the scenes features and more that add value to your reading experience at no additional cost.

An all-new direction! An all-new team! All-new threats! This is Fearless Defenders NOW!

This February, Cullen Bunn and Will Sliney bring together a new chapter in the team’s life in Fearless Defenders #1!

Art by WILL SLINEY

13 thoughts on “The Future of FEARLESS DEFENDERS Is Marvel NOW!”