Skip to content
This Summer The Biggest Comic Book Event Of 2013 Reaches All Corners of the Marvel Universe! 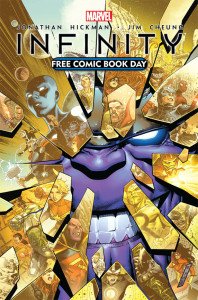 New York, NY—April 1st, 2013—Earth has been marked as an “Avengers World”, protected by Iron Man, Captain America, Thor and more from the deadliest threats facing humanity. A powerful and destructive race is on a collision course with Earth and the only thing in their path is the Avengers! But even Earth’s Mightiest Heroes realize the one hope of defeating this dire threat is to unite every great hero across the cosmos…because only with a united AvengersUniverse is there any chance of survival!

“Events stories simply don’t come bigger than Infinity,” said Axel Alonso, Editor in Chief, Marvel Entertainment. “ Jonathan Hickman is joined by three of our top artists — Jim Cheung, Jerome Opena and Dustin Weaver — to deliver an epic tale that covers all corners of the Marvel Universe and narrows the gap between Earth and the cosmos like never before.  It’s called the ‘MarvelUniverse‘ for a reason.” 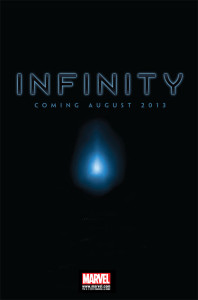 Readers get their first look at Marvel’s Infinity for free on Saturday, May 4th as part of Free Comic Book Day withFCBD: Infinity. In this all-new story by the blockbuster creative team of Jonathan Hickman and Jim Cheung, witness the opening shots of the war that will be heard around the galaxy. Plus, relive Thanos’ first solo story which has never been reprinted till now!

“I’m very excited about Infinity for a number of reasons,” said Hickman. “First, I think it’s wonderful that the story is coming organically out of what’s been going on duringMarvel NOW!. Things that we’ve seen unfold in Avengers, New Avengers,Thanos Rising, Guardians of the Galaxy, and others are the catalyst forInfinity. And second, for me personally, Infinity is the first big step in a series of big steps that make up the long term plans for the Avengers books I have the privilege of writing. It should be a lot of fun.”

Join Infinity writer Jonathan Hickman, Marvel Editor-in-Chief Axel Alonso and Marvel Executive Editor – Senior VP Tom Brevoort at 2 PM EST on Tuesday, April 2 in a special interactive chat where fans can submit their own questions and comments to be answered and addressed! Offered exclusively through Marvel.com, this will be your chance to find out more about Infinity from the people putting it together! 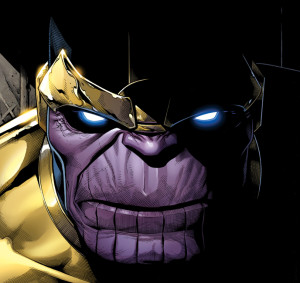 For more on Marvel’s Infinity, please visit www.marvel.com and join the conversation on Twitter with hashtag #MarvelINFINITY.