Creators Brandon Seifert and Lukas Ketner respond to your otherworldly emergency with the sequel to the breakout medical horror hit WITCH DOCTOR, from Robert Kirkman’s Skybound imprint at Image Comics.   Occult physician Dr. Vincent Morrow, paramedic Eric Gast and supernatural patient Penny Dreadful return in WITCH DOCTOR: MAL PRACTICE  with a new infusion of tales to captivate and shock you.   Even the world’s leading expert in supernatural disease needs to unwind sometimes. But when Dr. Morrow wakes up with no memory of what (and who!) he did last night, is it a case of partying too hard or something more malignant?   “I’m glad people loved Witch Doctor volume one so much — but we’re barely getting warmed up!” said writer Seifert, adding, “Mal Practice has more monsters, more magic, more medicine and more peril, as Dr. Morrow has to treat a very different patient — himself! And like they say — doctors make the worst patients!”

“This story really ups the stakes and pushes the characters to new levels of desperation — after all, what’s a witch doctor to do when he’s his own best hope to survive?” said artist Ketner. “I’ve been waiting to draw some of the stuff in Mal Practice since the very beginning of Witch Doctor, and I’m relieved that we’re finally taking the bandages off for all to see!”   WITCH DOCTOR VOLUME 2: MAL PRACTICE #1 is the first issue of a new six-issue miniseries, with story by Brandon Seifert, art by Lukas Ketner and coloring by Andy Troy, arriving in stores November28th with 32 pages of gruesome and gory goodness ($2.99/FC/T).   Reading WITCH DOCTOR VOLUME 2: MAL PRACTICE will make you instantly understand why Robert Kirkman picked WITCH DOCTOR as Skybound’s first new original title, and why The A.V. Club diagnosed it “Terrifying, hilarious and above all, smart!” Critics and fans agree, once you’ve been infected by WITCH DOCTOR, there is no cure. 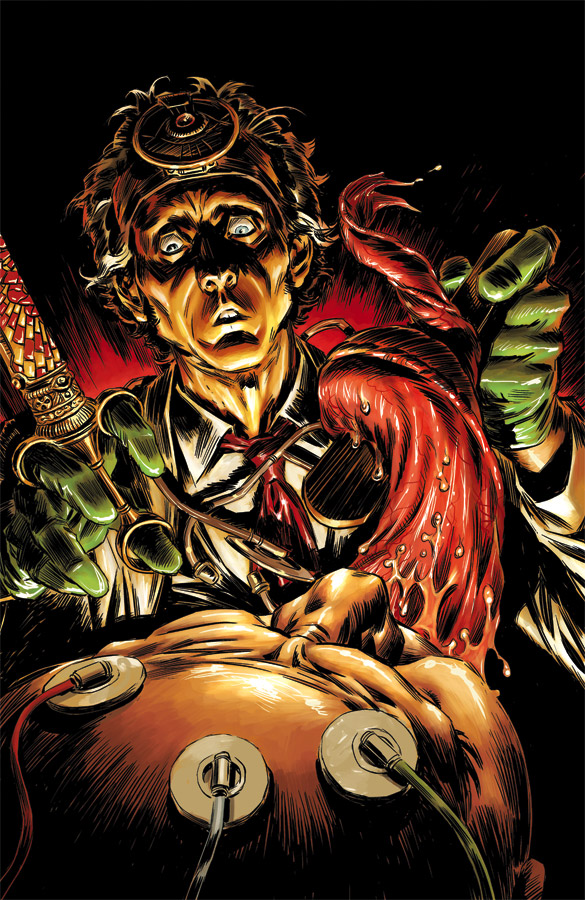 ABOUT ROBERT KIRKMAN Robert Kirkman’s success and passionate advocacy for creator-owned comics led him to become the first person invited to become a partner at Image Comics since the company’s inception twenty years ago and he formed his own imprint there, Skybound, in 2010.  Kirkman is the creator/writer of the EisnerAward-winning The Walking Dead, long-running Invincible, all-ages Super Dinosaur, The Astounding Wolf-Man, and new title Thief of Thieves, among many others. Kirkman has earned the respect of the comic, writing and television communities and topped the New York Times bestseller list for graphic novels in 2011 and in April 2012, he took the top five spots on both the hardcover and paperback lists. He’s the creator/executive producer and writer of the hit television show, AMC’s The Walking Dead, the highest-rated basic cable drama of all time in the U.S, also an international success in 120 countries and 250 million households. AMC is developing Thief of Thieves as a  potential series with Kirkman serving as creator/executive producer and writer. www.Skybound.com is your destination for all news and merchandise for Robert Kirkman, The Walking Dead and all Skybound titles.   ABOUT IMAGE COMICS Image Comics is a comic book and graphic novel publisher founded in 1992 by a collective of best-selling artists. Image has since gone on to become one of the largest comics publishers in the United States. Image currently has five partners: Robert Kirkman, Erik Larsen, Todd McFarlane, Marc Silvestri and Jim Valentino. It consists of five major houses: Todd McFarlane Productions, Top CowProductions, Shadowline, Skybound and Image Central. Image publishes comics and graphic novels in nearly every genre, sub-genre, and style imaginable. It offers science fiction, romance, horror, crime fiction, historical fiction, humor and more by the finest artists and writers working in the medium today. For more information, visit www.imagecomics.com.