Fan favorite Tyler Kirkham is bringing a new twist on the legacy of Frankenstein to comics. The new series, SCREWED, with interior art by David Miller has a feel that makes it perfect for Zenescope.  Check out the Press Release below:

“SCREWED fits right into the Zenescope wheelhouse and is a perfect addition to our catalog of titles. The combination of Tyler and Zenescope makes this book a must have.” says Zenescope Marketing Manager Stephen Haberman.

“I’ve always been a huge fan of Horror films and I love the idea of Frankenstein.” Says creator Tyler Kirkham “It’s a story that’s been retold a million times but none have been like this! This has horror, action and some flat-out sick, twisted moments! I always thought Zenescope would be a great fit for the story as it has a strong lead female role. I’m extremely excited for this series.”

Screwed follows a young woman who awakens in a hospital covered in scars as if she had been taken apart and put back together again; her mind as fragmented as her body. As she tries to piece together what’s happened to her, she will find many enemies are after her but she’ll also find a valuable ally in FBI Agent Erin Scott. 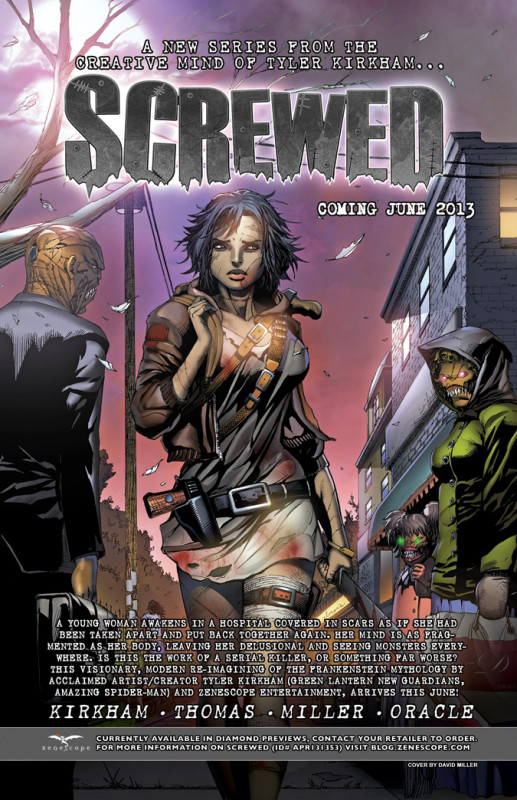 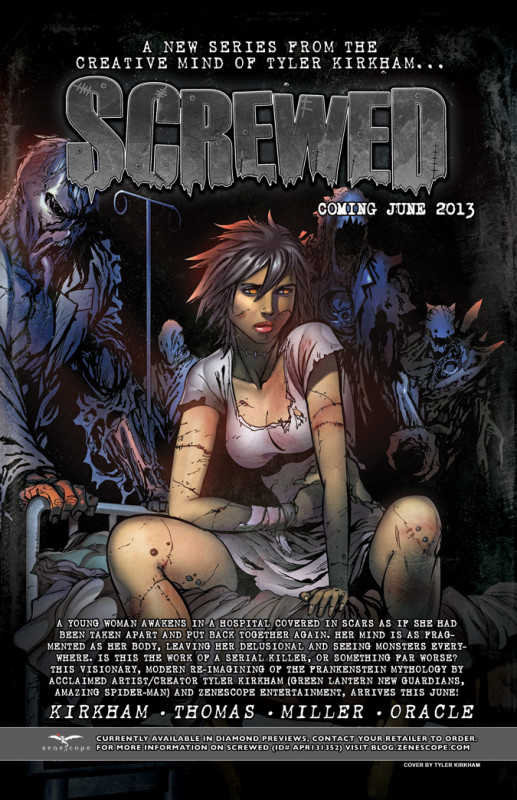 SCREWED is available now for pre-order through Diamond’s April edition of PREVIEWS.  For more information on SCREWED or any other Zenescope title, visit www.zenescope.com.

Zenescope Entertainment was founded by Joe Brusha and Ralph Tedesco in 2005, and has quickly grown into one of the top comic book and graphic novel publishing companies in the world. Zenescope’s Grimm Fairy Tales and subsequent spinoff series such as Wonderland, Neverland and Robyn Hood, which put a dark twist on classic fables, are some of the best-selling and longest-running original independent comic books on shelves today. Zenescope publishes and develops both original and licensed material and has worked with dozens of clients that include Discovery Channel, History Channel, CBS, Lionsgate TV, Mandalay Vision, New Line Cinema, Titmouse Studios and many others.