Jacob Mars would probably put a bullet in your head if you called him a “whore”, but in simple terms, that’s what he is. 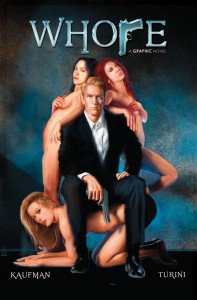 Jeffrey Kaufman (Terminal Alice) proudly presents a new, controversial graphic novel entitled WHORE. Written by Kaufman, drawn by Marco Turini (Marvel’s Squadron Supreme) and colored by James Brown (IDW’s G.I. Joe series), the novel answers the question, what if James Bond had no morals and would work for anyone who could pay him? This creator-owned graphic novel will be published by Zenescope Entertainment and will be available in September.

After getting downsized from the CIA, Jacob Mars will take any job he can to pay his debts and alimony. He isn’t a bad guy by nature, but out of necessity. He has to live a life where things don’t matter, as long as he gets paid. His motto, simply stated: “Every man has his price.”

“A unique but sometimes offensive guy, Jacob Mars in Whore takes you to places you never imagined you’d go,” said creator and writer Jeffrey Kaufman “He couldn’t be a better or worse character to write for.  Survival in his world is defined less by air and blood than by dollars and cents.”

“Jeff Kaufman brought all his story telling skills to the game on Whore.  It’s a great read with fast moving action, lots o’ thrills and sex, and some twists and surprises. Then there’s the Kaufman humor.  You’ll love Whore even as you hate him.” – Clayburn Moore (Award Winning Sculptor, Founder of CS Moore Studio Ltd)

“This book really is called Whore, but don’t let that fact keep you from picking this up, as it turns out to be a really enjoyable read… This is something you will definitely want to check out.” – Rob Wrecks, Indie Comix

Jeffrey Kaufman is a writer and founder of Big City Comics and Resurrection Studios. In addition, Kaufman is a nationally recognized legal expert and defense attorney, currently licensed in 18 states, and has been featured on CNN, MSNBC, FOX News and truTV’s Disorder in the Court: The 20 Most Outrageous Courtroom Moments. As a writer, Kaufman’s credits include Terminal Alice (published through Zenescope Entertainment) and Tainted (featuring Batwing artist Chris Cross).

Currently, Kaufman is actively filming and producing the documentary How to Fail in Comic Books (www.facebook.com/howtofailincomicbooks), set for release in 2013. His upcoming projects include the graphic novels Angel Falling and Whore, on sale September 2012, from Zenescope Entertainment.

About Zenescope Entertainment
Zenescope Entertainment was founded by Joe Brusha and Ralph Tedesco in 2005 and has quickly grown into one of the top comic book and graphic novel publishing companies in the world.  Zenescope’s Grimm Fairy Tales and subsequent spinoff series such as the Wonderland trilogy, Neverland and Inferno, which put a dark twist on classic fables, are some of the best-selling and longest running original independent comic books on shelves today. Zenescope’s licensed titles include the on-going, critically acclaimed Charmed series, based off of the long-running popular television series, as well as Se7en and Final Destination, based off of New Line Cinema’s successful film franchises.