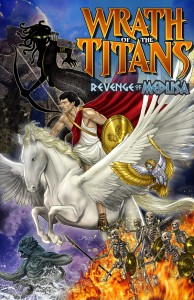 “Wrath of the Titans: Revenge of Medusa” makes a triumphant return to
Bluewater Productions. Packed with more monsters, more action and more thrilling
adventures, the sequel is guaranteed to be just as thrilling as the
original series.   The sequel is based off the sold out comic book series   “Ray
Harryhausen Presents” Wrath of the Titans”.

Written by the original team, Darren G. Davis and Scott Davis and
illustrated by Jaime Martinez. Each issue will retail for $3.99.

The new series, which makes it victorious this week, continues to conquer
the world of comic books with its return. The second, action packed issue
hits comic book stores the 1st week of July.

With the Gods humbled and the Kraken defeated, Perseus thought Argos was to
enter a Golden Age of peace and prosperity. He was wrong. War drums are
beating, the Olympians are again scheming and Perseus’ mettle would be severely
tested. But there is a new menace, neither man nor Olympian could envision.
This sequel contains more of what made 2008’s Wrath of the Titans a
successful and entertaining roller coaster ride: more action, more intrigue…and
more monsters!

“How do you challenge someone like Perseus?” writer Scott Davis asked,
“He’s already defeated some of mythology’s most dangerous creatures. You attack
from within. You find ways to erode his confidence and shake his faith. And
in this case, you do it with what made the last series memorable…monsters
and Olympian intrigue.

The original series is still available in graphic novel form at Amazon.com.
The 96-page graphic novel, “Wrath of the Titans”, delivers everything a
proper Greek Drama demands: a hero, a cause, secret pacts, divine meddling and
revenge, insurmountable challenges, dangerous creatures and non-stop
adventure.   To order it on Amazon click here: http://amzn.to/kbi2VL

Bluewater aims to unite cutting-edge art and engaging stories produced by
its stable of the publishing industry’s top artists and writers.

Tags: Bluewater, WRATH OF THE TITANS