Spinning out from the pages of New Avengers, Marvel is pleased to announce Avengers 1959 #1 (of 5), a brand new mini-series from comics legend Howard Chaykin, this fall! An unique team of super powered individuals of the post-World War II era including, Sabretooth, Kraven the Hunter and Namora, must combat threats in New York, Madripoor, and everywhere in between!

“I’m grabbing what feels like a brass ring here, with the opportunity to do an untold story of the lost years of the Marvel Universe,” explained Chaykin. “In a follow up to the sensational stuff laid out by Brian Bendis in NEW AVENGERS, we’ll follow Nick Fury and his Avengers around the world as they track down and take down super powered survivors of the Third Reich–as their ever effort is countermanded by a mysterious agency with a dark agenda of its own.”

Can the team save the day without tearing each other apart and who else will join the ranks of Earth’s Mightiest? Get the full story behind Nick Fury Nick Fury led Avengers Initiative as they trek across the globe saving the entire Marvel Universe from peril, only in the action-packed Avengers 1959 #1 (of 5)!

Story and Art by HOWARD CHAYKIN

ON SALE THIS OCTOBER 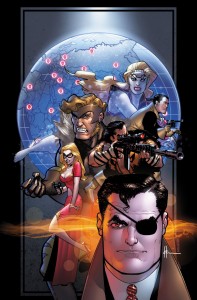