Check out the cover and info to Ziggy Marley’s MARIJUANAMAN #1!

A HERO FOR A NEW GENERATION

Ziggy Marley to join Image Comics for an exclusive signing at Comic-Con International 2010
Berkeley, CA – 1 July 2010 – Grammy Award-winning musician Ziggy Marley is adding another title to his already impressive resume: comic book author.
The first issue of Ziggy’s book, MARIJUANAMAN, will hit store shelves across the country on April 20, 2011. In support of his book, Ziggy will be making an exclusive one-day-only appearance at Comic-Con International. On Saturday, July 24, Ziggy will be signing MARIJUANAMAN posters with publisher Image Comics from 11:00 a.m. to 12:30 p.m. at booth #2729. Joining him will be artist Jim Mahfood (MIXED TAPES) and co-writer Joe Casey (GODLAND, OFFICER DOWNE).
Five-time Grammy winner and Reggae icon Ziggy Marley’s early immersion in music came at age ten when he sat in on recording sessions with his father Bob Marley. For the next decade, as front man to Ziggy Marley and The Melody Makers, Ziggy released eight best-selling albums, garnering three Grammys, with such chart-topping hits as “Tomorrow People” and “Tumbling Down.” Ziggy’s first solo album, DRAGONFLY, was released in 2003, to much critical acclaim.  His second solo release, LOVE IS MY RELIGION, won a Grammy in 2006 for Best Reggae Album. His third solo release, FAMILY TIME, scored him a Grammy in a new category: Best Musical Album For Children.
Now, Ziggy is blazing into the comic world with his latest project, MARIJUANAMAN. Ziggy’s new superhero, Marijuanaman, is from a planet that is in desperate need of THC. Marijuanaman seeks to save Earth’s marijuana fields from destruction by the drug company PharmeXon, and thus saving his home planet from destruction.
“I have been reading comics since I was a little boy in Jamaica,” Ziggy declares. “I am very excited to be a part of Image Comics, Comic-Con, and the comic book community.”
Don’t miss Ziggy Marley’s appearance at Comic-Con International 2010, where he will be signing limited edition Marijuanaman posters at Image Comics, booth #2729, on Saturday, July 24, 2010, from 11:00 a.m. to 12:30 p.m. The first issue of MARIJUANAMAN will be in stores April 20, 2011. Find out more at www.marijuanamancomic.com. 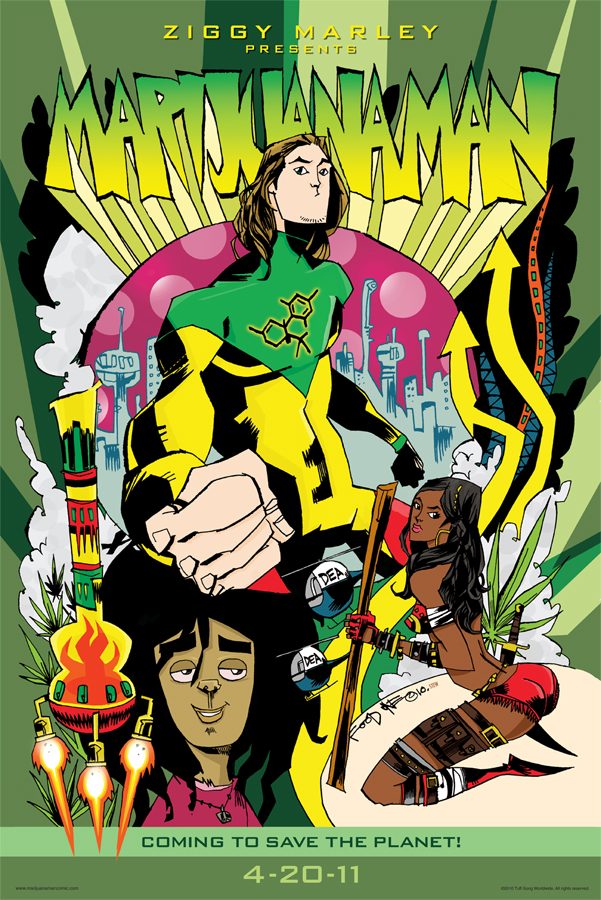