Sookie and Eric Discover a New Threat in The French Quarter 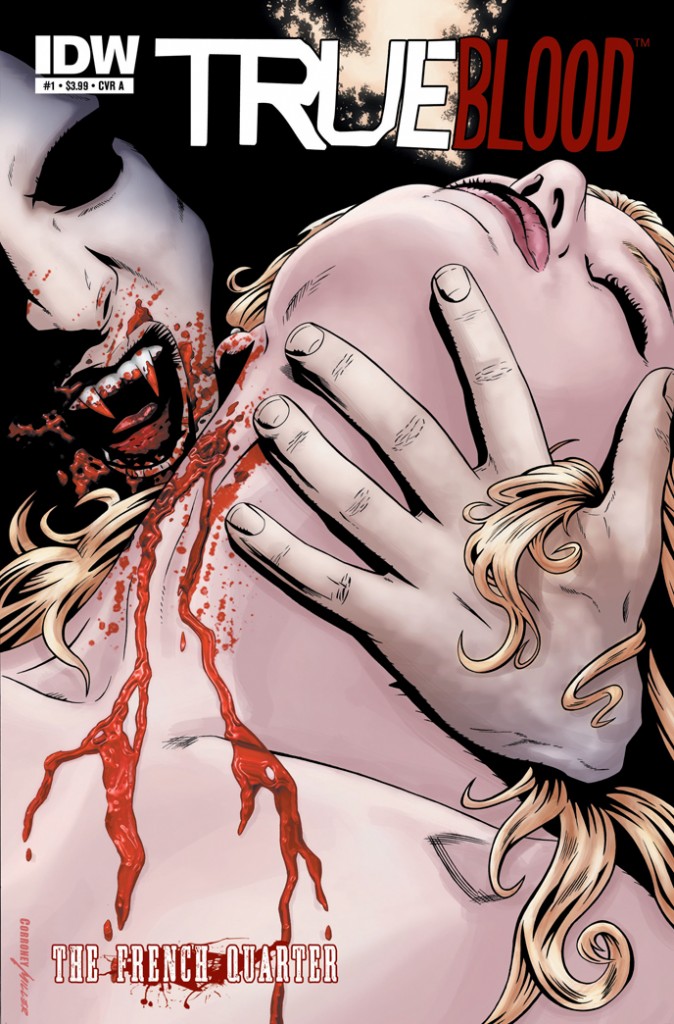 San Diego, CA (June 1, 2011) – IDW Publishing and HBO®, Inc. are pleased to announce the continuation of their mega-hit comic series with TRUE BLOOD: THE FRENCH QUARTER, an all-new six-issue story arc beginning in August, 2011.  Trubies’ favorite characters return, including mind-reading waitress Sookie Stackhouse and vampire Sherif Eric Northman, who join forces to track down a killer in New Orleans. Intrigue and suspense will follow Sookie and Eric, as will Bill Compton, in IDW’s TRUE BLOOD: THE FRENCH QUARTER, based entirely in the supernatural world of the critically-acclaimed HBO hit television show.

“We are delighted to be announcing the third installment of our True Blood comic series,” stated James Costos, vice president of Licensing & Retail.  “The franchise has been extremely successful and offers a terrific way to for fans to engage with their favorite characters all year long.”

As with the previous stories, IDW’s TRUE BLOOD comics offer fans all-new plots with their favorite characters. In this sequel to the first New York Times best-selling TRUE BLOOD compilation, “All Together Now,” and the second series “Tainted Love,” Sookie and Eric travel to New Orleans to track down a killer named Guerra, whom Eric and Godric thought they killed in Paris more than 200 years ago. Bill Compton’s in town, too, making sure Eric doesn’t get too close to Sookie, and investigating a local Hep-D outbreak that may be connected to Guerra’s latest victims. Meanwhile, back in Bon Temps, Trubies will wonder why Pam is hanging out at Merlotte’s and what it is she wants with Lafayette.

Joining writers Mariah Huehner and David Tischman are artists David Messina and Claudia Balboni, who will bring this latest story arc to life. Messina and Joe Corroney will provide covers. Trubies everywhere will be left wanting more of TRUE BLOOD: THE FRENCH QUARTER, the newest original adventure, featuring the same erotically-charged romance, wry humor, mystery and suspense for which the show has become known.

TRUE BLOOD: THE FRENCH QUARTER #1 ($3.99, 32 pages, full color) will be available in stores in August 2011.
Visit IDWPublishing.com to learn more about the company and its top-selling books.
About IDW Publishing
IDW is an award-winning publisher of comic books, graphic novels and trade paperbacks, based in San Diego, California. Renowned for its diverse catalog of licensed and independent titles, IDW publishes some of the most successful and popular titles in the industry, including: Hasbro’s The Transformers and G.I. JOE, Paramount’s Star Trek; HBO’s True Blood; the BBC’s Doctor Who; and comics and trade collections based on novels by worldwide bestselling author, James Patterson. IDW is also home to the Library of American Comics imprint, which publishes classic comic reprints; Yoe! Books, a partnership with Yoe! Studio; and is the print publisher for EA Comics.