IN A WORLD OF DEMON WORSHIPPING MAFIOSO, A MYSTERIOUS HITMAN NAMED TRYPP MUST AVENGE THE DEATH OF A FRIEND, WHILE HE SUCCUMBS TO HIS INNER DARKNESS 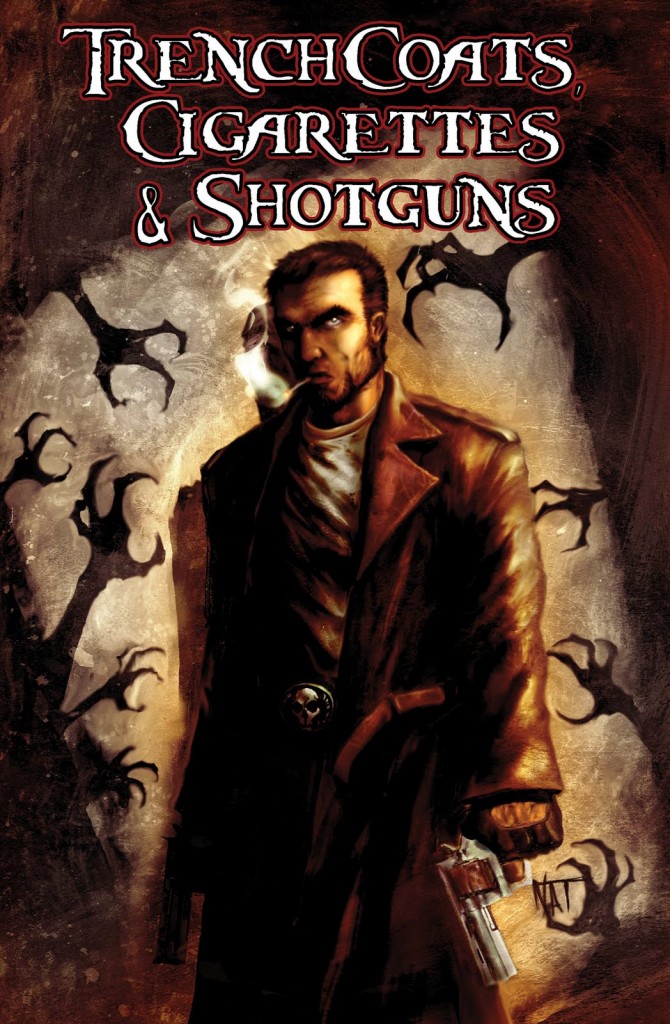 Trenchcoats, Cigarettes and Shotguns preview can be seen here:

“I’m really excited to be working with Chuck brown and Philipp Neundorf to publish this incredible story, “explains Publisher Frank Forte, ”  It’s very original, with a dark storyline and twisted characters.  It’s exactly what Asylum Press wants to bring to the masses.”

Trenchcoats, Cigarettes and Shotguns is set in a world filled with mech wielding gangsters, demonic Mafioso and demons that run wild on earth, a mysterious hit man named Trypp only relies on three things, his trenchcoat, his cigarettes and his shotguns.  A new kind of crime family begins to emerge in New York City, one that uses ancient satanic rituals to gain the speed, strength and other attributes of demons from Hell. When the demonic mob murders the friend of a mysterious hit man named, Trypp; he begins to leave a path of death, destruction and blood to avenge her. But he also begins to embrace the darkness within his soul.

“Working with Philipp Neundorf was a writer’s dream, ” explains writer Chuck Brown, “though we bumped heads now and again he was able to take the world of Trench coats, Cigarettes and Shotguns to new heights. Assembling this book took a lot of sleepless nights, time & sweat. But in the end I thinks we created something unique and special. Take away all the demons, death, magic and mayhem in the book you’re left with a simple story about a grain of good trying to say afloat in a sea evil. Something I think a lot of people can relate to and enjoy reading.”

Artist Philip Nuendorf reminisces about creating Trenchcoats, Cigarettes and Shotguns; “Doing a full color page a day for around three months is an intense period of time. Even more when strong personalities like Chuck and I meet. Often enough we were crushing our heads like Trypp the demons in the book. Back then, after bandaging my wounds and then looking at the pages, I felt it was worth the fight. And as I was looking at the book again for the occasion I still feel like that. Doing comics next to the big productions is tough. But damn worth the experience.”

ABOUT CHUCK BROWN:
Brown has written and published six anthologies as a senior member of 803Studios. He’s published an online strip at theschoolofart.com and Brown is currently working with Dark Horse writing “Rotten Apple” for Dark Horse Presents #s 2,3,4 & 5. He’s also in the process of scripting an 80pg GN and web comic for MTV/geek.

ABOUT PHILIPP S. NUENDORF:
Philipp S. Neundorf lives and works as an artist in Berlin, Germany. He focused on Comics several years ago. Since then he published several short stories, cover artwork or pinups online and printed. Next to that he is having exhibitions as an artist in Berlin. He also did work as a graphic designer, doing designs for computer games, or the artwork for cd-covers.  Philipp’s comic credits include: GtT: Rogue, End Of All, Winter War, SPX-Anthology 2004, and Scorn.

ABOUT CONQUEST STUDIOS AND 803 STUDIOS:
Conquest begun back in 2001. With one ashcan and a hand drawn logo, Chuck Brown bounced around from Convention to Convention and learned all he could about comics, the industry and being a writer. In 2004, he ran into fellow writer Steven Prouse at the Orlando Mega Con, and 803 was born. Since then, Anthony Hightower, Steven and Chuck acted as Senior Members of 803Studios and published over a dozen comics. Now, Chuck has decided to stretch his legs and re-launch Conquest; while maintaining very close ties to 803.