The Avengers movie hits over $750 worldwide….now this….

Following the world changing effects of Avengers VS. X-Men #5, the Marvel Universe will face a dramatic change unlike any fans have ever seen before bringing the action packed first act to a close. Then, the
comic book event of the summer kicks into overdrive as Act Two begins in Avengers VS. X-Men #6! Thought you knew everything about the Phoenix Force and what it’s capable of? Think again, True Believer!  Get in on
all the excitement as Avengers VS. X-Men #5 and Avengers VS. X-Men #6, hit comic shops, the Marvel Comics app http://www.marvel.com/marvelcomicsapp , and Marvel Digital Comic Shop this June. 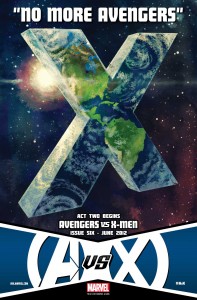 Marvel Entertainment, LLC, a wholly-owned subsidiary of The Walt Disney Company, is one of the world’s most prominent character-based entertainment companies, built on a proven library of over 8,000
characters featured in a variety of media over seventy years. Marvel utilizes its character franchises in entertainment, licensing and publishing. For more information visit www.marvel.com