Straight from the InvestComics™ Forum comes Robert McClelland in his first of many comic book reviews!! Welcome to…….Awesome Sauce. 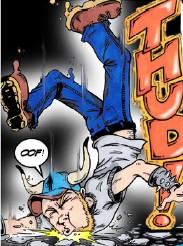 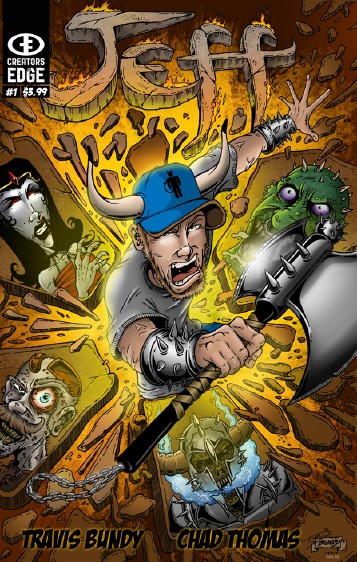 Jeff is an American living the American Dream, although I think for him, his version of it doesn’t exactly fit with everyone else’s! Something I’m sure he himself would agree on! As his Boss is quite crappy and his house looks like its seen better days!  Now, we got Jeff Balke on the coloring of this bad boy! And I must say, it is awesome! We have Travis Bundy and Chad Thomas for writing and art duties. One thing I do want to say is that the art in this reminds me of old style drawing. Something you might find in say older issues of X-Men comics.So for those of you that miss that sort of thing, then go and check this out just for the art alone!

The cover to me is very attractive. As it shows our Hero jumping right out at you! Along with his Ax and a variety of enemies he has to do battle with!

Now aside from his crappy boss and house that has obviously seen better days, is the fact that Jeff often gets involuntarily transported to an alternate universe. One filled with Dragons, Magic, and other various sorts of things! Once our Hero arrives, he’s supplied with an Ax, some spiked gauntlets, and horns on whatever hat he has on. Why it happens, he’s yet to figure out. The writing for the story, I found myself enjoying very much.

Oddly enough, I find my 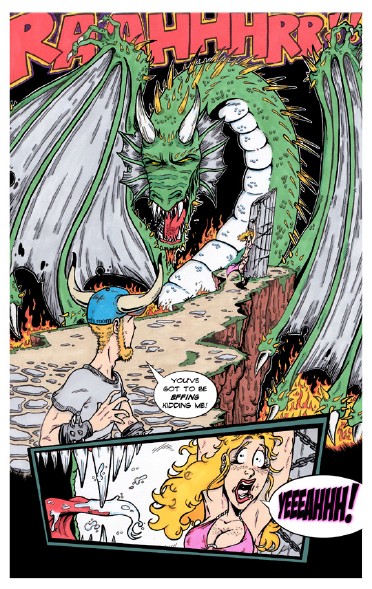 self wondering if the artist is a fan of Dragon Ball/Dragon Ball Z/GT. As the big bad Jeff finds himself fighting, reminds me of a character from the show. I won’t spoil it for you readers. But I’m sure for fans o f Dragon Ball, you might see what I am talking about when you read this great first issue yourself ! It seems that every time Jeff comes to this Alternate Universe, he must always perform a heroic d eed. And this one involves saving the classic Damsel in Distress! Have to admire his quick thinking once he saved her! But as I learned, and you the reader will eventually learn, is that Jeff and whatever Damsel he saves is never fully able to properly “thank” the Hero for his good deed.

…As he’s often transported back home right before the Damsel can really do anything, placing him back in his own reality, and often late for work, resulting in being forced to seek out Help. And after readying himself for a good time, he unfortunately is interrupted! How this happens, I’ll leave that up to you to find out when you read this! As for a rating on this most awesome issue, I give it a 5 out of 5 fantasy Stars! My final opinion however, is that you go out as soon as possible and get this! Read it, love it, and share it!