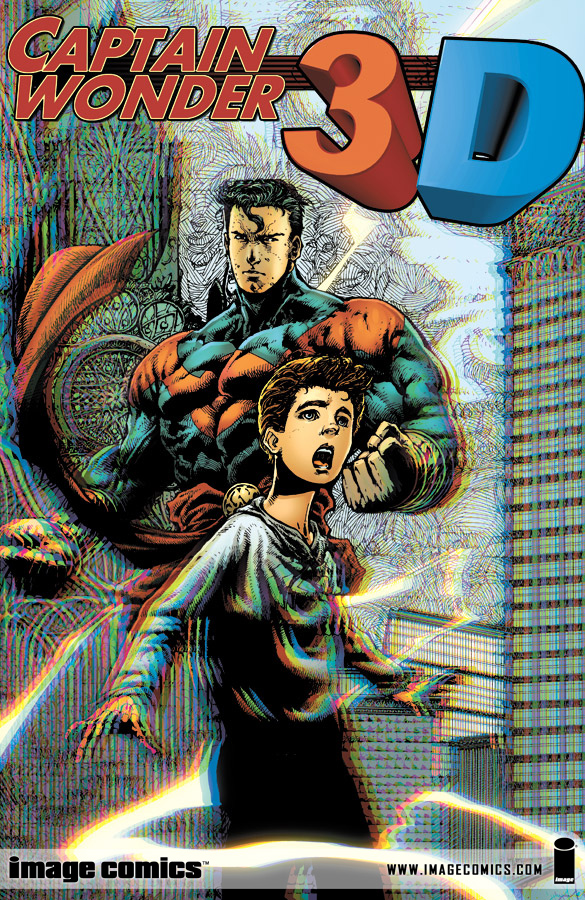 Berkeley, CA – 27 December 2010 – This February, you’ll be able to enjoy an extra dimension with the release of CAPTAIN WONDER 3D from Image Comics — a comic book featuring the most advanced 3D ever used in the medium!
This 48-page one shot is from comics superstars Brian Haberlin (WITCHBLADE, SPAWN, ARIA) and Philip Tan (Green Lantern, X-Men, SPAWN), who share writing and art duties in this thrilling superhero tale. 3D glasses are included!
“With CAPTAIN WONDER, we developed an all-new 3D process, making this hands down the best 3D in comics,” exclaims Haberlin. “We’re sure we put the wonder back into comics with this book, and comics fans of all ages will not be disappointed.”
Tan says, “Working on Captain Wonder was so much fun, creating a world, new villains, new heroes… It was a blast to work on, and it’s a blast to read. So much new stuff out there is dark these days — it was great to help create something that was fun and light!”
Captain Wonder is the superhero of this world — he’s saved millions of people during his 24-year career. But now everything is going to Hell in a hand basket: Captain Wonder has been missing for the last two months, and the harmony he so carefully protected is beginning to crumble. What happened to Captain Wonder, and when will he return? The answer may lie with Billy Gordon, a 10-year-old boy who may be in danger himself and may be the world’s only hope!
CAPTAIN WONDER 3D, a 48-page full-color one-shot featuring the most advanced 3D technology in comics and the glasses to view it, will be in stores February 16, 2011, for $4.99.
Image Comics is a comic book and graphic novel publisher founded in 1992 by a collective of best-selling artists. Image has since gone on to become one of the largest comics publishers in the United States. Image currently has five partners: Robert Kirkman, Erik Larsen, Todd McFarlane, Marc Silvestri and Jim Valentino. It consists of five major houses: Todd McFarlane Productions, Top Cow Productions, Shadowline, Skybound and Image Central. Image publishes comics and graphic novels in nearly every genre, sub-genre, and style imaginable. It offers science fiction, romance, horror, crime fiction, historical fiction, humor and more by the finest artists and writers working in the medium today. For more information, visit www.imagecomics.com.