Are you a collector? Maybe a reader? Well InvestComics covers it for you this week. And also, looks like Archie Comics will be making some history (again) this week! 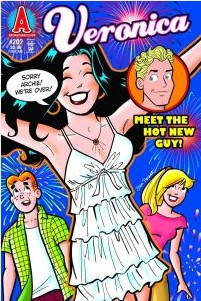 For 71 years Archie Comics have been published. Archie himself will be 70 years old in December, and still not one gray hair. Wait, didn’t he get married recently? Yes that hair color might change after all! Well Archie and the Archie Comics line have been through some changes over the years. Changes like the marriage, the “real style” look, and now Veronica #202. This historic Veronica comic is just that, historic to epic proportions. The local/national news, radio, newspaper and just about any other medium you could possibly think of has covered this comic….months ago. Yes months ago when the press release went out that revealed Archie Comics will have its’ first gay character ever. Welcome Kevin Keller to Riverdale gang! Indeed Archie Comics have turned the corner, so stop thinking the Archie line is for kids only. It’s not; the company has grown up a bit and it is starting to deal with real issues, real stories, real people and real life period. Is this what the comic medium needs is another “real” life scenario type based comic book company spilled out into a company that is known for its lighter approach to life? Well, you have to go where the money is, and it’s not little kids reading comics anymore. Granted Archie Comics still have their regular Archie books, but this “other approach” is making some huge noise in the media market and the lining of their pockets. Lest we forget everyone, this IS in fact a business, don’t kid yourself.

Archie Comics is about to break loose in more ways than one. Theater, music, television, and motion pictures, yes an Archie movie is on the horizon and it will be very successful. Do you think that Archie is covered in over 70 markets worldwide, been in business for 71 years because they aren’t a savvy, intelligent, and 100% committed and aggressive in their market? They know what they are doing, and they do it extremely well. Editor in Chief Victor Gorelick has his company firing on all cylinders, he continues to keep his foot on the throttle, so you better buckle up because Archie Comics is taking off! Veronica #202, sell out immediately, you better get to your shop early.

Taskmaster #1 from Marvel will be a mild success, but you could get Tasky’s first appearance for a mild $8 in Avengers #195 (1980). Don’t look for this comic to break the bank in terms of investment value, but anything that is 20 years old, with names like David Michelinie and George Perez attached to it, and is a first appearance should be in your collection.

Sellouts for Marvel this week will be Thor for Asgard #1, Wolverine #1 (another number one issue for this guy?? And better yet, 6 different covers?? Why?), Wolverine: Road to Hell #1, Heroic Age: One Month to Live #1, I Am an Avenger #1, and Origins of Marvel Comics #1 X-Men. The most interesting books of this bunch have to be Herioc Age: One Month to Live #1 and Origins of Marvel Comics: X-Men #1. “Heroic..” seems that it will be a good story. While Origins is a retelling of the same ol’ X-Men, but this time Marvel gets some big guns to write and draw them. Do we have an original idea here? Not in the least. A fun non-original idea? Yes, so run with it.

Cartoon Network Action Pack #51 gives us a first look at a cartoon star in a DC book. He’s called Generator Rex. 2 sleepers hit this week. IDW’s 5 Ways To Die, and Aspen’s Scourge #1. Scourge comes at us with some overkill with 4 covers. Micah Gunnell variant getting the nod here for best of the 4 (picured below).