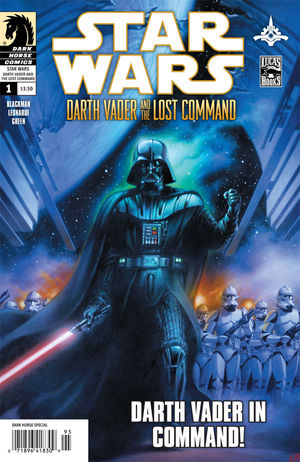 The ‘Star Wars Universe’ is a vast place, full of characters and worlds that have become a part of us. After all how many of us would rather have a Wookie than a brother or sister? But recently it seems the main focus of the SWU has been the pre ‘A New Hope’ things. The Clone Wars and The Old Republic are interesting and very exciting, but for many of us old school fans we are looking for the events and situations that happened 5 – 10 years before the Battle of Yavin!

Thank you Dark Horse for not only hearing our wishes but also delivering with an incredible comic, ‘Darth Vader and the Lost Command’!

Set a few years after the events in ‘Revenge of the Sith’ the Lost Command finds Dart Vader fresh off a loss. With this loss, the Emperor has not only lost confidence in him, but Imperial officers like a young Grand Moff Tarkin have little respect for him. sent on a mission to

The book is very much like the German invasion of the Soviet Union in the early 1940’s. The Empire, much like the heavily mechanized Germans, come into a snow covered planet in the Ghost Nebula. Here, Vader sets up his attack on the edge of a river, again like the German’s did during World War Two. And much like they did, The Imperial forces get into the city led by Darth Vader and torch and kill everything and everyone.

In this book more than anywhere else you see how ruthless Darth Vader truly is. At the beginning of the book you get a glimpse into his tortured mind and soul, and add to that the fact that his peers do not trust him puts him in a very foul mood. Good for the reader, bad for anyone who opposes him.

You can tell writer Haden Blackman had a lot of fun with this one. He knows his characters and writes with an intimate knowledge of the Star Wars universe. His dialogue and pace are perfect and I hope Hayden spends a little more time in the Star Wars sandbox.

The visuals by penciller Rick Leonardi and inker Dan Green do a nice job in capturing the familiar look and feel of Star Wars. Their action sequences are full of motion and despite the fact Vader is encased in armor, you can feel the emotions emoting from him. For confirmation on that, just look at the first six pages.

Colorist Wes Dzioba is the unsung hero in this book by helping display emotion with color. Love, pain, anger and cold are on Wes’ pallet.

To grab your eye, the cover(s) by Tsuneo Sanda and Doug Wheatley would look at home as posters; both beautiful and help to capture the power of our favorite Dark Lord of the Sith!

This book is a must have for any Star Wars fan! If you are looking to fill the gaps between Episode’s III and IV this is a great place to start. What I’m hoping for is this timeline to be explored more fully!

Matman, along with Brian LeTendre are the co – hosts of the Secret Identity Podcast! This twice weekly show can be found at www.secretidentitypodcast.com and contains at least a few Star Wars references a show. In his spare time Matman has written a six issue mini series (in his head not on paper) about the ‘Battle Of Hoth’ cleverly entitled ‘Hoth’!

5 thoughts on “Comic Review: Darth Vader and the Lost Command”