South Florida based comic book publisher Cosmic Times is partnering with My Digital Comics to release their titles in a digital format. More inside…!

COSMIC TIMES IS GOING DIGITAL WITH MY DIGITAL COMICS 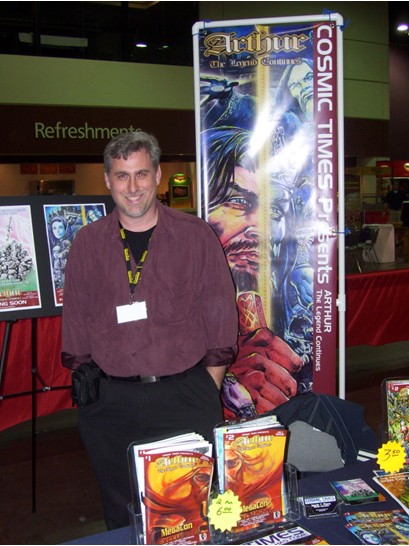 South Florida based comic book publisher Cosmic Times is partnering with My Digital Comics to release their titles in a digital format. This will allow readers to view Cosmic Times products on computers, iPads and other portable digital devices.

Currently Cosmic Times is offering the first issue of their critically acclaimed series “Arthur: The Legend Continues” for $.99. Ultimately their entire catalog of titles including “Decisions” and the forthcoming mini-series “Souled” will be made available. Cosmic Times is committed to delivering quality content via digital platforms at the $.99 price point as long as the market will allow.

“This is a new direction for Cosmic Times,” said Cosmic Times publisher Martin T. Pierro. “We have had a fantastic experience working with Discount Comic Book Service, so when we decided take the first steps into the digital world it only made sense to team up with My Digital Comics (a sister company of DCBS). Going forward we will continue to focus on physical comics, but our goal has always been to deliver quality stories to potential readers and we view the digital market as another way to do just that.”

About Cosmic Times: Cosmic Times was created by Martin T. Pierro in 2009 as a small press comic book publisher. The first offering from Cosmic Times was “Arthur: The Legend Continues”, a high concept series that follows the adventures of King Arthur as he returns to England in a post apocalyptic future to free his people once again. “Arthur: The Legend Continues” was received with critical and fan acclaim and was followed in 2010 by Cosmic Times’ latest series “Decisions”. Following the success of “Arthur” and “Decisions” Cosmic Times recently announced their third project “Souled”, a five-issue mini-series written by author Christopher Faulkner.