From DC Universe: The Source 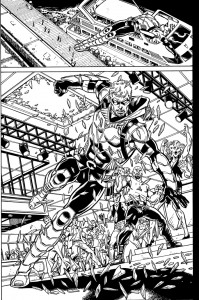 This fall, a new era begins for Oliver Queen. We caught up with GREEN ARROW penciller Dan Jurgens about working on the series’ art with industry legend George Perez.

“Once upon a time, I was asked to draw an issue of Teen Titans because the book’s usual artist, George Perez, needed a break,” Dan told us. “Marv Wolfman was the writer, and one of the things his script asked for was a double page spread with so much detail that it would ‘make George Perez jealous’.

Ri-i-i-ght. As if I, or anyone else, could have done so. When it comes to detail, or, more importantly, attention to detail, George is unequaled. Some people view that as an element of his personal style, which is true. But, more importantly, that stylistic detail exemplifies the fact that he cares tremendously about the quality of his work. George’s commitment to the page, be it as writer, penciller or inker, is second to none.

That’s why J.T. Krul and I are so thrilled to have George inking GREEN ARROW. In the first issue, I drew a spread with a cobblestone street, simply because I knew George could make it sing. Now, that might not sound like much in and of itself, but in terms of making a page work with a sense of something extra, that’s a fastball down the middle of the plate for George. He’ll put it in the seats every time. 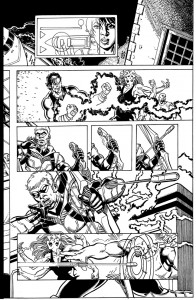 George’s legendary status in this business is well earned. It’s a pleasure to work with him again and a total and complete thrill to watch him elevate the art on GREEN ARROW into something special.”