CLICK ON pictures to be directed to Darkbrain Comics web site NOW!! 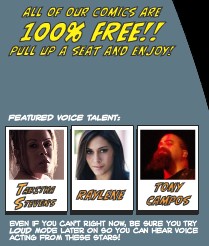 One year ago, DarkBrain.com launched an innovative and edgy new website. Since that launch, publisher Andrew Zar and dozens of artists have worked very hard to produce and publish online over 400 pages of serialized graphic novels featuring voice over narration from some of the most renowned adult film stars and rock musicians. To celebrate their first birthday in the world of web comics, DarkBrain.com is excited to announce their entry into the world of mobile comics and even print comics.

Beginning in February 2011, DarkBrain will introduce their existing and all upcoming issues of their comics in a movie (MP4) format so that it is easily viewable on mobile devices such as iPads, iPhones, Androids and PSPs among others. In addition to the existing series CHURCH OF ONE, MIRROR, MIRROR, THE BUTCHER and SORTAN-VALTA, stories slated for 2011 that will be available in this new format include LOCKED OUT, GRACE COMES HOME, RASHIDA’S ASCENSION (members-only), GENESIS OF AURORA and HAZMAT. Most titles will be delivered in a bimonthly format on the site so readers get plenty of action as the story builds to the conclusion. As in their existing Flash comics, these mobile comics will have a PG-13 version available for free and an uncensored version for members. The release schedule that DarkBrain has announced is as follows:

· Feb. 23 – CHURCH OF ONE #2 with Tabitha Stevens returning as Pastor Holly.

· Mar. 2 – GENESIS OF AURORA #2, the second chapter in our first creator-owned series.

The milestone month of February also brings the completion of two of DarkBrain’s most popular titles: LOCKED OUT and MIRROR, MIRROR. To commemorate their completion, DarkBrain is taking steps into unknown territory. For LOCKED OUT, besides making the four issue story into the mobile comic format, the web comic publisher has also made a digital download version of the complete graphic novel. To view and download this full graphic novel, readers must possess a paid membership to DarkBrain.com. Memberships are available for 3 month increments for only $20. For members, both the graphic novel and the mobile comics for all series feature completely uncensored content designed for the mature reader.

DarkBrain’s 2nd popular title, MIRROR, MIRROR is truly going where DarkBrain has never gone before – print. With the story coming to a shocking end, all five issues of MIRROR, MIRROR have been collected and will be available in an actual printed graphic novel, featuring uncensored content and a foreword written by legendary adult film star Tabitha Stevens, who also plays the role of Brenna, the cursed dominatrix in MIRROR, MIRROR. MIRROR, MIRROR: FORGIVENESS is currently in pre-order through DarkBrain.com and will be sold through IndyPlanet.com and for retail distribution through ComicsMonkey.com. MIRROR, MIRROR: FORGIVENESS is due for release on February 14, 2011 in conjunction with the web release and mobile comic release of the fifth and final installment to the series. As an incentive to pre-order, DarkBrain also announced that the initial print run will be autographed by Tabitha Stevens. 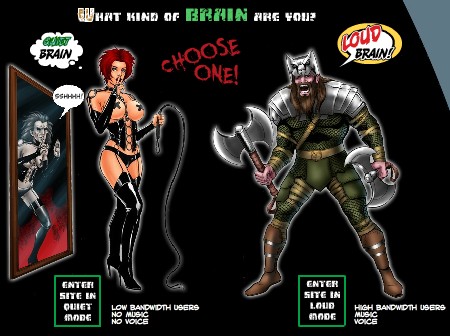