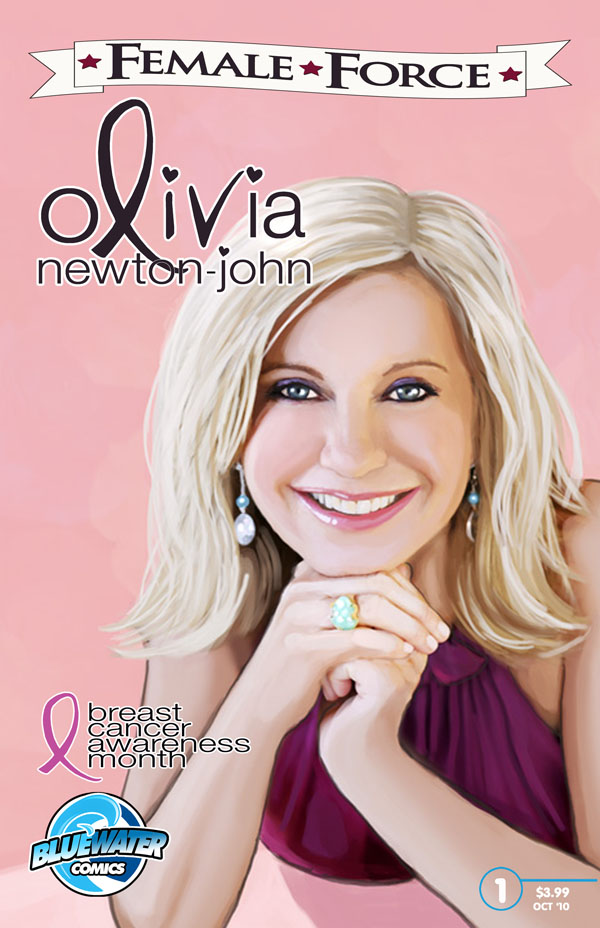 Actress and singer Olivia Newton-John survived her battle with breast cancer. Now she’s devoted her life to helping other women beat this disease. This makes Newton-John the ideal subject of Bluewater Production’s Female Force line of biography comics in which she is working with Bluewater on this venture.

Female Force: Olivia Newton-John will hit comic book shops and online retailers such as Amazon.com in October. The comic will not only trace the four-time Grammy award winner’s rise to stardom, it will also generate funds for breast cancer research, with a portion of the book’s proceeds going to the “Olivia Newton-John Cancer Centre”.

The comic’s October release is no coincidence; that month is National Breast Cancer Awareness Month. In honor of this, Susan G. Komen for the Cure, the nation’s leading breast-cancer awareness group, will provide a breast cancer resource guide with the comic.

“Breast cancer in the beginning that was hard to talk about.  So it takes a while before you can put it into a category that you can discuss without becoming emotional” Olivia Newton John said to Bluewater about her coming out publicly about breast cancer.

Newton-John worked with Bluewater and writer Sandra Ruckdeschel on the comic’s script. Ruckdeschel said that working on the story was an experience that she’ll never forget.

“What I learned most about Olivia Newton-John after researching her life and writing about her is her love for humanity,” Ruckdeschel said. “She has such a huge heart and wants to share that with the rest of the world. Her fight against breast cancer displays that well: She survived her own battle with it and, rather than going on with her life as usual, she took it as a sign that she is meant to help others in their battle with the disease.”

Ruckdeschel’s script traces Newton-John’s career from her starring role alongside John Travolta in the hit musical film Grease to her ode to aerobics, Physical.

“Olivia Newton-John has had an amazing career,” said Darren Davis, founder and president of Bluewater Productions. “Her greatest victory, though, come in 1992, when she survived her battle with breast cancer. We are happy to work with her on this comic and to hopefully play at least a small role in the fight against breast cancer.”

Bluewater Productions publishes a wide range of comics, from superheroes to horror to children’s tales to its much-discussed line of biography comics. Past biography comics from Bluewater have focused on the lives of Hillary Clinton, Barack Obama, George Bush, Nancy Pelosi, Robert Pattinson and Michael Jackson.

Ruckdeschel says that Newton-John is a particularly fitting subject for the Female Force series.

“I idolized Olivia Newton-John before working on this project,” she said. “After learning even more about her I see her for the beautiful human being that she is. That is why she is a valiant subject for the Female Force series.”

For more information on Bluewater Productions, visit the company’s Web site at www.bluewaterprod.com.