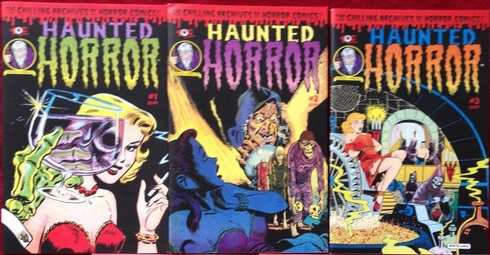 The reason the comic industry went downhill and lost the bulk of its sales was due to the censorship of comics in 1954.
The reason comics became valuable and collectibles in the 1960’s was due to nostalgia to find these pre-code uncensored violent and horror themed comic books.
Last year IDW began a new ongoing series which reprints some of the most shocking early 1950’s comics based on grotesque graphic art and violent and scary themes.
Haunted Horror is already up to #6 so far but the series has received almost no attention from comic collectors.
This itself is shocking considering that these reprint the most important controversial comics from 60 years ago that are worth hundreds or possibly thousands of dollars each.   This series alone brings these stories to a new audience and also makes it affordable to read new printings of these classic horror tales.
Most retailers likely don’t give this comic any space on the shelf and I would not be surprised if the print run of each issue is no more than 1500 copies each.    Not even #1 ranked on the Diamond Top 300 best sellers making all issues very small print runs guaranteed.    #6 to #8 are solicited to yet come out before Xmas.
#1 came out last year and is sold out from Diamond and from IDW.
Sales have been sporadic online ranging from cover all the way up to $23.85 !!
Sets of early issues have all brought above cover price and are proving to be popular with those interested in classic horror.
But as the rarity is revealed prices are set to potentially increase for good.
Long term I believe this series is “gold” as golden age collectors will hunt out this obscure new series.
A comic so good it’s…SCARY! Imagine you were a kid in the 1950s reading contraband horror comics under the bed covers by flashlight! You were devouring the very comic books you parents, your teachers and anti-comics crusader Dr. Fredric Wertham were trying to keep out of your hands! Now you can recreate that same experience, because the comics that were banned are back in actual comic-book format! The people that brought you Dick Briefer’s Frankenstein, Bob Powell’s Terror and Zombies are now producing a comic book series filled with the best of worst vintage horror comics that will rot your mind! Don’t dare miss the first issue of Scary from the Chilling Archives of Horror Comics fiends!
http://www.comics.org/series/69101/covers/
Here are the classic contents of issue #1:

Black Magic in a Slinky Gown

Genre:
horror-suspense
Synopsis:
Leonore Black is a beautiful woman, but also able to transform herself into a giant black widow spider. In this form she kills men who do harm to spiders: collectors and zoologists. The human black widow meets her fate when stung to death by a swarm of wasps.
Reprints:

The comic gives the credits as “Artists: Attributed to Mike Sekowsky and Bill Walton”.

I am always happy to hear your comments and thoughts/criticisms on any of my posts.
Terry Hoknes (author) of Hoknes Comics loves analyzing statistics and watching the growth and fall of comic titles over a period of time.  He sells all of the latest hot back issue secondary market new comics and all new Diamond products at www.HoknesComics.com and also self-publishes a series of books called “Investing In Comic Books” that focus on the Golden, Silver and Bronze ages of comics. hoknes@hotmail.com