San Diego, CA (July 13, 2011)—Continuing the assent to San Diego Comic-Con, IDW Publishing today announced HAWKEN, an all-new, six-issue comics series illustrated and co-created by comics legend Tim Truman, best known for his reinvention of Jonah Hex and Hawkman, as well as his groundbreaking work on Scout and Grimjack. HAWKEN will be scripted by Ben Truman, who co-developed the series with his father.HAWKEN tells the story of aging gunman Kitchell Hawken and his bloody, one-man vendetta against the Tucson Ring, a brotherhood of arms merchants and corrupt politicians who once employed him.

“Hawken has been many things in his day,” said Tim Truman. “Scout, tracker, scalp-hunter, raider, hired gun… But mostly, he’s been a nasty son-of-a-bitch.”

In each issue, the team will reveal new pieces of the character’s past. “Suffice it to say that after a lifetime spent doing some very bad things, Hawken had one last shot at redemption. The Ring took it away. Just what a any good Western revenge epic needs. However, in HAWKEN, that’s where things get strange.”

Strange indeed. Hawken has unusual companions on his war trail: The ghosts of every person he’s ever killed, cursed to assist the old man against their wills. “In many ways, it’s not the ghosts who haunt Hawken. It’s Hawken who haunts them. They try to trip him up at every turn.”

Renowned for depicting hard-scrabble, violent heroes, Tim admits that the new book ups the ante. “Folks would be hard pressed to find a character as ruthless and pissed-off as Kit Hawken. He has good reasons for his rampage, and believe me, a rampage it is. For once, the bad men have truly messed with the wrong guy.” 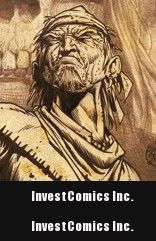 Scripter Ben Truman, who also works as an educator in Tucson, described the project starting almost by accident. “My parents were visiting here in Arizona, and while driving through Sunset Crater Park I asked Dad if he’s ever seen any accounts where a man had survived a scalping. Somehow, that kicked it off. Hawken grew from the landscapes of each new place we visited: His name in Flagstaff, his past in Bisbee, the curse in Tempe, his vendetta in Tombstone. By the time we left San Xavier Mission, the first issue was plotted. A year later, we signed a contract with IDW. We all hope this story will grab people like it did us.

“HAWKEN takes people to unexplored corners of the Wild West, paying homage to spaghetti westerns and the like.” Along the way, the creative team grabs familiar Old West themes by the throat and twists them inside out.

“When I first heard about this project, I jumped at the chance to work with an industry legend,” says editor Denton J. Tipton. “Tim continues to produce at the highest level, and working with Ben has pushed him even harder to exceed expectations. And they surely don’t disappoint with HAWKEN.”