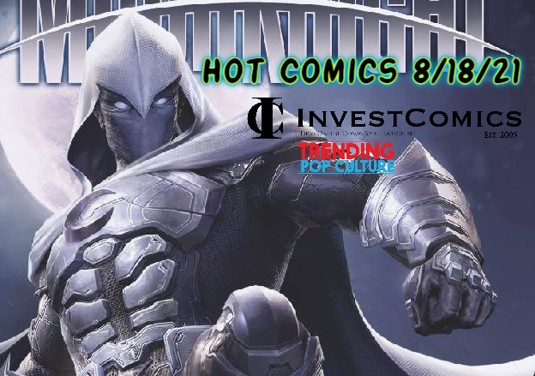 InvestComics/Trending Pop Culture; SINCE 2005.
Here are this week’s top Trending/Spec Comics and Best Cover Art out this Wednesday 8-18-21.
Click on ALL Red-Highlighted LINKS, comic covers to BUY/BID from ALL available eBay sellers.

Moon Knight #2 – The new hot series continues as we are still a ways away from the live-action Disney plus show. While this new Moon Knight series will indulge the fan’s appetite, the new television show will probably produce a new number one issue and new series.
Warhammer 40,000 Sisters Of Battle #1 – Marvel’s first appearance of Sisters Of Battle. Writer Torunn Granbekk and artist Edgar Salazar.
Eat The Rich #1 – New horror series from Boom Studios. We all know the successful runs Boom has had on their horror books. This series will be no different. Sarah Gaily writes and Pius Bak will pencil.
Batman Secret Files Clownhunter #1 – It seemed and seems as though DC Comics really really wanted and wants their new character, Clownhunter, to be a hit with the fans. We have the perfect idea to get this Clownhunter character going for DC. It’s so goofy, but if they want sales and attention, make Clownhunter Joker’s son. That’ll get the interest boiling in a hurry.
Second Chance #1 -New series from Image Comics.