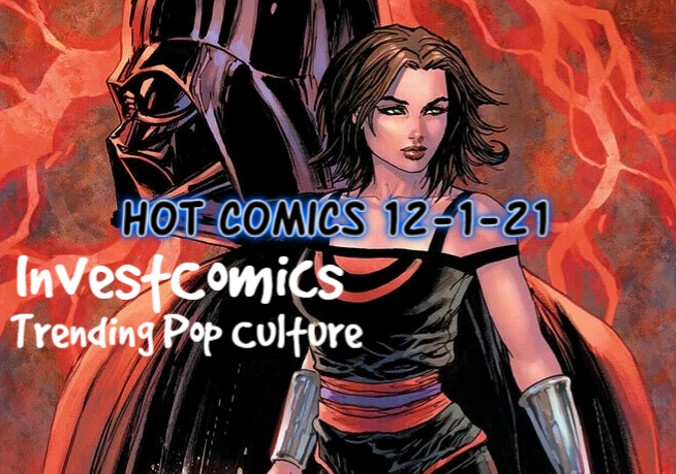 InvestComics/Trending Pop Culture; SINCE 2005.
Here are this week’s top Trending/Spec Comics out this Wednesday 12-1-21.
Click on ALL Red-Highlighted LINKS/Comic Covers to BUY/BID from ALL available eBay sellers.

Daredevil #36 – The “final” Daredevil issue comes with a Marvel Comics warning to buy this issue, even if you haven’t bought a Daredevil issue ever. That’s a very strong/confident request. Our question is, why is this series ending exactly? Oh, we know why. To get that cash-grab/ALL-NEW Daredevil number one issue with about 20 variant covers that’ll probably debut in 2022. Disney knows money and they know how to get it out of collector’s hands very easily. There’s no wrong or right to that, companies should make their cash any way they see fit, but it sure does water down the significance of number one issues in the collectors market with relaunch after relaunch. Oh, look, a pretty cover with the number one on it! The silly speculation market has truly lost its way.
Avengers #50 (750) – Here’s an example of what our mini-rant is about regarding the constant number one/relaunch series coming out. The Avengers comics have reached a historic number, 750. That’s 750 combined Avengers comics from all of the silly relaunches and whatever else. Instead of the 750th issue, we get Avengers #50 with variant covers showing fans how truly dumb the relaunches are with the number 750 on it. Marvel obviously would love to keep the numbering from the original outset, otherwise, they wouldn’t even acknowledge anything about the 750th, but pretty covers with that number one on it trumps everything. So, we get the variants with numbers 750 or 500 or whichever. Okay. Anyway, this issue has the Avengers recruiting some new members and promises to start a whole new era for the Avengers.
Devil’s Reign #1 – A Kingpin story that’ll span a six-issue series. Look for a lot of appearances from the Spider-Man rogue gallery and some surprises. Writer Chip Zdarsky and artist Marco Checchetto.
Star Wars: Crimson Reign #1 – A very dark Star Wars series will begin this Wednesday. The first appearance of a new SW character; Sear. This is gonna be a biggie. Star Wars’ equivalent to Claremont/X-Men, Simonson/Thor, Miller/Batman, writer Charles Soule will shine as usual.
Wastelanders Wolverine #1 – Everyone loves Baby Yoda. Disney wants us to love Baby Hulk now. Yes, not a typo, Baby Hulk.

There will be an onslaught of DC Comics annuals this Wednesday. Makes sense, right? End of the year, annuals! Here are some highlighted annuals we like; Nightwing 2021 Annual #1, Dick Grayson and Jason Todd team up. Batman 2021 Annual #1, a huge focus on the new character; Ghost-Maker. Joker 2021 Annual #1, the Joker “unleashes hell.” Detective Comics 2021 Annual #1, New villain introduced, Maeger Man. Also the beginning

of a new major storyline; Thomas Wayne Shadows Of The Bat.
As DC floods their readers and collectors with their annuals, Marvel continues their one-shots regarding the “temporary” death of Doctor Strange. The Death Of Doctor Strange Spider-Man #1 and The Death Of Doctor Strange Blade #1.
King Of Spies #1 – A new secret agent spy comic from Image Comics. Writer Matt Milla and artist Matteo Scalera.
Magic Master Of Metal #1 – The introduction of the Master Of Metal universe from Boom Studios.
Animal Castle #1 – When the Stray Dogs (IDW) comic was announced in 2020 to become a movie, with zero ink dried, the comic speculation market went bonkers when the comic was released in February of 2021. The comic, in our opinion, at one time was way way overpriced. A CGC 9.8 sold for $175 on the 27th of November 2021. It was a yellow label signed by two creators. It’s safe to say that the market has come down to planet earth just a tad. Because of the success regarding talking animals and animated movie-making, we have seen others trying to capitalize on this concept. Nothing new at all with talking animals, just a hot ticket right now. This Wednesday, Animal Castle #1 says its new story is geared towards fans of their new series. Released by Ablaze Comics.

Spawn #324 – The Spawn comics are still a thing. Still a hot seller, but cooling down some. The second full appearance of Sinn.
Evil Ernie #1 – Another one of those hot characters back in the day from Chaos Comics (30 years ago) that seems to have fallen out of favor with many readers/collectors. Dynamite Comics looks to recapture some of that fire with a slew of comic talent. Will this be a one-shot? No idea.
Maniac Of New York: The Bronx Is Burning #1 – The Jason wannabe character terrorized New York in his first arc, now he’s off to the Bronx. Knowing and growing up near there, this dude in real life wouldn’t stand a chance, but comics are made for fun.
Hotell #1 – new horror stories from Artists, Writers & Artisans.
Batman Fear State Omega #1 – DC Comics promises a new status quo that will affect the entire DCU.

Here is the latest CSSully Twitch video, yesterday at SDCC: LIVE Outside the BAIT #SquidGames party.
The CSSully Twitch channel airs various LIVE episodes throughout the week and is must watch. LIVE gaming, giveaways, Art, NFT talk/knowledge, contest, shout-outs, in-show purchases, and so much more. Click on the CSSully link and subscribe now.