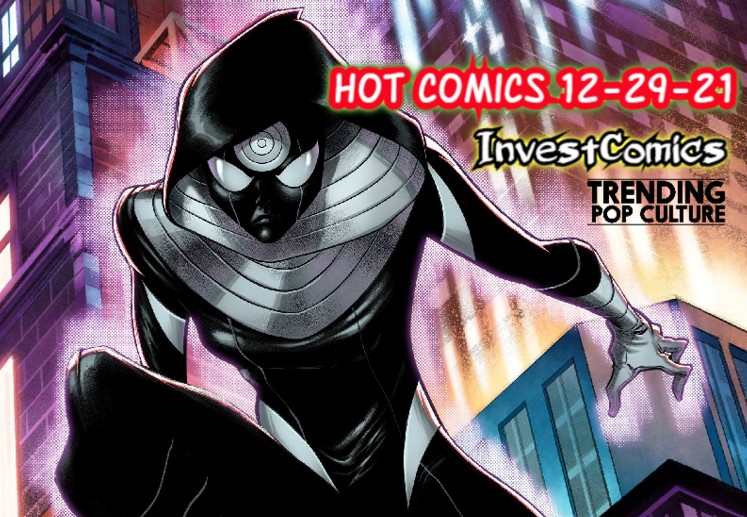 InvestComics/Trending Pop Culture; SINCE 2005.
Here are this week’s top Trending/Spec Comics out this Wednesday 12-29-21.
Please note: All new comic releases can and will change release dates from time to time. Check with your local comic shop on the guarantee of arrival time. If ordering from eBay, check with the seller or post details.
Click on ALL Red-Highlighted LINKS/Comic Covers to BUY/BID from ALL available eBay sellers.

Timeless #1 – One of the hottest comics in some time will hit this Wednesday. Not because of a pretty cover this time. It will be because of a legit reason. The Loki Disney Plus show introduced Miss Minutes on the show, and while she didn’t make an impact the way Baby Yoda did, she did make an impact within the Marvel Universe fanatics. Fans loved the character and now comic collectors will love her, even more, this Wednesday. It didn’t take Marvel (Disney) long at all to capitalize on the interest. The Timeless #1 comic will be the official comic book debut of Marvel fans’ favorite walking/talking, clock. There will be multiple variant covers, but the main one to capture will be the Humberto Ramos variant with the prize right there on the cover. This will be a scorching hot comic in the aftermarket, so you best get it asap.
Amazing Spider-Man #83 – Speaking of covers, Marvel is on a fun run (fun run, we rhymed!) with their Devil’s Reign villain variant covers. The covers consist of mashing up heroes with villains and creating (some) cool-looking characters. This mash-up Spidey cover is badass.
The Death Of Doctor Strange #4 – Another hot comic this week will be the debut of the new Sorcerer Supreme. SHE will be taking over the mystic duties until Marvel decides to bring back the original Doctor Strange and have the two of them live in harmony within the Marvel Universe.
Stray Dogs: Dog Days #1 – We gave fans a very big heads up with the InvestComics Hot Picks and Top 5 Comics when the original Stray Dogs comic was about to debut. Needless to say, the comic exploded in the aftermarket (some crypto-coin as a thank you would be nice). Well here we are, again? Not really. History always shows that the overkill usually kills a mood with series’ after series’. With the attention span being nil to none in today’s speculation market, Stray Dogs will eventually suffer the same fate as many other, “look pretty colors!” faze. That’s unless the ink is really dry on the go-ahead to make the animated film. It’s truly a gamble, especially today, to spend top dollar on comics that are optioned. Some, most, never come to fruition and the hundreds and sometimes thousands of dollars spent on that variant number one issue is just another cool comic story. The new series debuts with 64 variant covers. More absurdity here. Too many comics will not equate to the capturing of higher market prices if this trends upwards. Be wise here.

Power Rangers Universe #1 – We’re not going to pretend we know much about the Power Rangers. Always transparent here. Always. What we do know is that this new comic will explain the origins of the Power Rangers Universe and that in itself is neat. We think, again, we think, the variant shown here is the debut of a new character too. Maybe? Let us know in the comments section in our social media posts if you are in the know. Thanks in advance!
Teen Titans Academy #10 – And continuing more “origin stuff”, Nevermore gets the spotlight here.
Devil’s Reign #2 – Wilson Fisk, Spider-Man, a host of Marvel characters and villains, and here come the Thunderbolts. Hell yes. Marvel’s hot new series continues this Wednesday.
Deathstroke Inc #4 – Deathstroke vs Black Canary vs a host of DC villains. Why are you NOT reading this comic?
Wastelanders Star-Lord #1 – Old man Quill and old Rocket Raccoon set out on a new adventure. A possible first appearance here too.