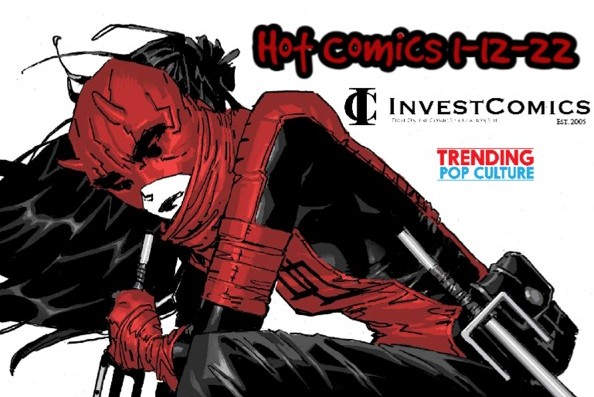 InvestComics/Trending Pop Culture; SINCE 2005.
Here are this week’s top Trending/Spec Comics out this Wednesday 1-12-22.
Please note: All new comic releases can and will change release dates from time to time. Check with your local comic shop on the guarantee of arrival time. If ordering from eBay, check with the seller or post details.
Click on ALL Red-Highlighted LINKS/Comic Covers to BUY/BID from ALL available eBay sellers.

Death Of Doctor Strange Bloodstone #1 – The female hero/villain is absolutely dominating the comic book medium these days. Case in point in this article right here, 8 out of the 15 or so comics featured this week have a female character gracing the cover. While this in no way is a bad thing, we’re just stating the obvious. Female dominance in the comic book media is extremely prevalent right now. Whether it’s a television show, a movie, or a comic book, the ladies have a stronghold within the storytelling. What does this all mean really? Well, this is an easy one to figure out because of the overinflated modern comic book speculation market these days. But just in case you’re a bit slow to the punch, we’ll tell ya! Buy up any female first appearance comic book on the cheap. Heck, InvestComics was informing this over 10 years ago! Getting the speculator on top of a Daredevil #254, 1st Typhoid Mary, for a dollar. Raw copies are still around $60-$120, while the graded 9.8’s are around $240+. That’s just one example of countless first appearance female character comics we told y’all about. Why we thought of Typhoid Mary is complexly random. But, Marvel’s newest female character, Lyra Bloodstone, will make her debut this Wednesday in this comic. The variant (shown here) will be the prize get if this comic takes off.
She-Hulk #1 – Comic creator John Byrne was the one to rescue the She-Hulk character out of the doldrums. Boy was this character bombing, but in 1989, Mr. Byrne changed all of that. Everything you see from the She-Hulk today is owed to John Byrne’s revamping. Yes, even the new Disney+ show. Now writer Rainbow Rowell and artist Roge Antonio bring us the next era(?) of the She-Hulk. With the female dominance, we speak/spoke of, what better time than the here and now to capitalize? A harder spec book to figure out than the previously discussed. One last thing, there are a ton of variants accompanying this release, but one standout for us is the Jen Bartel variant with She-Hulk and Jack Of Hearts. InvestComics was talking Jack Of Hearts 10 years ago and we’ve always had a soft spot for him.
Daredevil The Woman Without Fear #1 – Here’s an interesting thing Marvel did. Made Daredevil a woman. Then, they saw the interest and immediately decided to give her a solo series. Yikes, we’re moving quickly here, no? Honestly though, no matter really, it’ll probably sell like hotcakes, become an overpriced stuffed bear, and then tank. Actually, that’s more so for the She-Hulk series. While the She-Hulk series will remain interesting, this series here, written by Chip Zdarsky (art by Rafael de la Torre), will remain on top of its game throughout. Not to say the She-Hulk series will be bad, we’re banking on Chip’s previous success, while we are not too familiar with Rainbow Rowell’s.
Spawn The Scorched #1 – Oh look, another female badass. This time from Todd “the marketing machine” McFarlane. The new Spawn team book has She-Spawn(?) donning most of the covers for the first issue. Or is that a new character altogether? Can’t tell anymore. Either way, look for new characters popping up all over this series from the start.

Star Wars The High Republic: Eye Of The Storm #1 – A new Star Wars comic? Yes, and it’ll be sold out before the end of this sentence. See, sold out. Hello, second print.
Devils Reign Superior Four #1 – Doc Ock’s first appearance of the Superior Four. What will this consist of exactly is anyone’s guess, but it will be interesting nonetheless.
Detective Comics #1048 – The weekly story, “The Tower”, continues with part two. An introduction or two may happen. Be on alert.
Wastelanders Black Widow #1 – The first appearance of Black Widow in the “Old Man” universe.
Batman Urban Legends #11 – Bat-Hound will get his own story within these pages. Starring with many other DC Comics pets. Wonder if there will be dialog or just a whole bunch of walking around and sniffing. Oh yes, thought bubbles, that’s it. That’s what they’ll do. A bark bark or a meow meow will be translated to human.