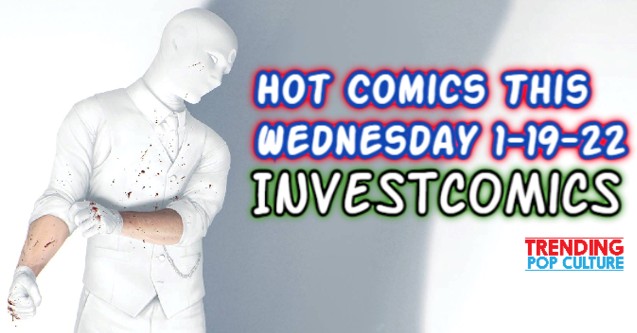 InvestComics/Trending Pop Culture; SINCE 2005.
Here are this week’s top Trending/Spec Comics out this Wednesday 1-19-22.
Please note: All new comic releases can and will change release dates from time to time. Check with your local comic shop on the guarantee of arrival time. If ordering from eBay, check with the seller or post details.
Click on ALL Red-Highlighted LINKS/Comic Covers to BUY/BID from ALL available eBay sellers.

Ben Reilly Spider-Man #1 – Ever since Ben Reilly was introduced back in 1994’s Web Of Spider-Man #118, speculators have wanted this comic to be “worth something” for reasons unknown. Yes, to make a quick buck, but that in itself is not a good enough reason. Fast forward to the 2022 speculation market and the rumors themselves make this comic overpriced very easily. The rumor that never came to fruition this time was that Ben Reilly was to possibly appear in the new Spider-Man movie, No Way Home. Well, spoiler alert, he never showed up. Now what? Well, we’re back to square one. Maybe he’ll show up in the new SpiderVerse animation movie? Great, let’s drive up prices more again. The point is, as said here time and time again, refrain from following the crowd and do your own research. Your own gut instincts will guide you the best, and guess what? You’re going to miss the boat on some hot comics, but most of the time you’ll get that second chance because of the ridiculous market peaks and then tanking. Most of the time sellers cannot even give their books away when the modern market corrects itself. Yes, there are some that sustain their asking price (for no true legit reasons too), but there are more that do not. So, what is to become of Ben Reilly with Miles Morales waiting in the wings as the next Spider-Man in the Marvel U? Your guess is as good as anyone’s guess. Our guess, Peter will never be cast aside for Ben. Makes zero sense. Miles, well, that makes more sense.
Silk #1 – A new series starring a character InvestComics really pushed for when she debuted in 2014. We were correct then and we still love her. Potential is still on the upside after all of these years. Still room for her somewhere, the Marvel U needs to place her in the right place/right moment and the true explosion will happen. The new series will debut a new villain in the first issue. This will be the comic writing debut of Emily Kim. Artist Takeshi Miyazawa makes their return. So, a good all-around comic here.
Silver Surfer Rebirth #1 – The old-school cosmic universe storytelling returns from Marvel this Wednesday. The creative team, artist Ron Lim and writer Ron Marz, return to a character they had much success with. In this debut, you’ll find the Reality Stone, Thanos, Captain Mar-Vell, and of course Silver Surfer. God knows who else shows up in these pages, but this will be a great read and a return to some fantastic storytelling regarding the Marvel Cosmos.
Detective Comics #1049 – “The Tower” story continues its weekly run in the pages of Detective Comics. Making Arkham Asylum a “tower” in the middle of Gotham is a great idea and someday should be used in continuity all the time for DC within their comics and their moving picture media.
Hulk #3 – With a recent announcement, hot writer Donny Cates will either strike lightning twice or become a bore. Donny turned the Venom series on its proverbial head when he created the villain known as Knull into the mix. The breaking news came he is about to do essentially do the SAME thing for the Hulk series he’s writing. Create a “Knull” for the Hulk series beginning with issue number six. What this means exactly is not known, but IF Donny Cates follows the same formula, and it seems too close to the Venom story, will fans get perturbed or embrace it? We say he creates a familiar story pattern but makes for a good NEW Hulk villain that will again command overpriced modern comics all over the place. What does this mean moving forward you may ask? This means you get in the game early and buy issue number one and two and you buy issue number three this week. A hint or a droplet of the new Hulk “Knull” villain will drive the modern speculator, sites, and apps into a frenzy. A mere presence of something that could relate to the new villain will create a bonkers vibe as the markers on eBay will try to cash in. Be in the know and have your copies ready to sell at absorbent prices when and IF the Hulk poop hits the fan before issue #6.

X Lives Of Wolverine #1 – Another dive into Logan’s past. This time Marvel says, “The Biggest Wolverine Story Of All Time Begins Here!” Okay, so the hype machine is rolling, as usual. The plus side here is writer Chip Zdarsky is on board along with March Checchetto. That in itself should peak anyone’s interest. The comic story calls for big revelations and new things we have to look forward to. Will it be revealed that Sabretooth is his brother? Haha! Remember that rumor? Boy, the spec boys cleaned everyone out on that one too.
Moon Knight #7 – Let’s all learn more about Doctor Moon. He debuted in issue number one and he’ll be a focal point at the end of this issue and next.
Nightwing #88 – The fan-favorite blue stripe costume makes its way back in this issue. Why did it ever go away in the first place? And what’s with that “hug cover”? Rated PG.
Amazing Spider-Man #86 – A story Marvel says will “shake you to the core” and have fans talking for years. Keep an eye out on this one.
Batman The Knight #1 – As Marvel dives into their past with Logan, DC will do the same with Bruce here. The countless, endless story, of Bruce’s dramatic night, will be revisited once again. Writer Chip Zdarsky will take readers on the journey from that moment to Bruce becoming the Dark Knight. Yes, the television show Gotham carried us through this process already as did many other DC Comics throughout the years, but it’s always enlightening to see/read a new creative perspective on it. Artist Carmine Di Giandomenico joins in as the other half of the creative perspective.
Catwoman #39 – Writer Tini Howard makes her writing debut for this series.

Strange Academy #15 – The spotlight shines on a character introduced two issues ago (cameo), Gaslamp. That name, yikes. But an in-depth look at this character makes for an interesting look. Get the Strange Academy #14 comic for their first FULL appearance.
Two new Devil’s Reign comics this week to check out; Devil’s Reign Villains For Hire #1 and Devil’s Reign X-Men #1. Marvel Villains For Hire team is a bit different than the original squad from the 2011 debut.
Robins #3 – Possible debut of a new villain team.
The Death Of Doctor Strange X-Men/Black Knight #1 – Expect to see Black Knight everything after that post scene in the movie. Always a C-list character and never landed well with comic fans. He’ll do okay in the movies, but the comic character will never be in demand on paper. It just doesn’t translate well in the pages of a comic and readers for some reason. There are many characters like this, so this isn’t a Black Knight bashing, just our opinion.
Bolero #1 – New series from Image Comics. Creative team; Wyatt Kennedy (writer) and Luana Vecchio (artist)