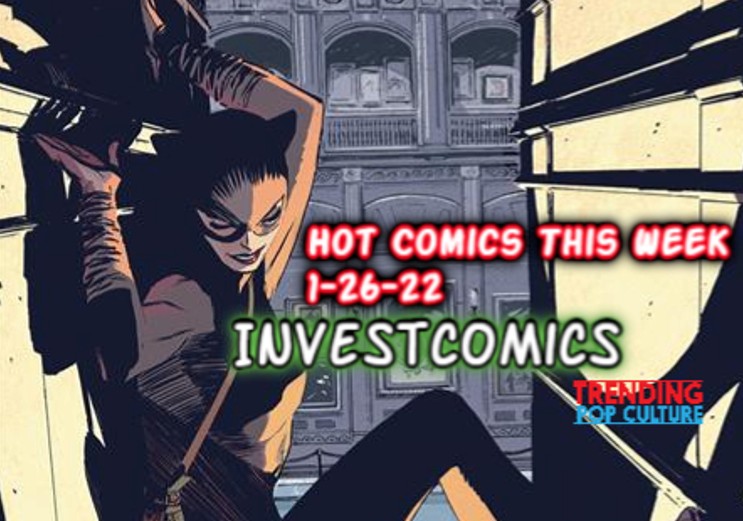 InvestComics/Trending Pop Culture; SINCE 2005.
Here are this week’s top Trending/Spec Comics out this Wednesday 1-26-22.
Please note: All new comic releases can and will change release dates from time to time. Check with your local comic shop on the guarantee of arrival time. If ordering from eBay, check with the seller or post details.
Click on ALL Red-Highlighted LINKS/Comic Covers to BUY/BID from ALL available eBay sellers.

Detective Comics #1050 – “The Tower” storyline hits on its fourth straight weekly issue. This issue though hits a bit different than the previous three. It’s a special celebratory landmark 1050th book. Since when was 1050 a celebration number? Guessing a nice square number, like Van Halen’s 5150, but not. So what will DC deliver here? They’ll have a return of a villain that you’ll be “surprised” to see. A bunch of superstar creators in this book, including the return of writer, Mark Waid. He’ll team up with artist Dan Mora for a side story that’ll include Superman and Batman. 48 pages of Detective Comics celebration. Enjoy!
X-Men #7 – Learn more about the newest X-Man; Captain Krakoa. Introduced in the previous issue.
Mary Jane/Black Cat: Beyond #1 – We’ve spoken about the abundance of women comic book characters these days. With pure speculation and no numbers to back this up, it’s probably at an all-time high regarding changing genders for well-known characters and introducing new ones as well. So, a comic release like this makes sense. Mary Jane has to save her nemesis, Felicia Hardy. AKA the Black Cat.
Saga #55 – The hit Image Comics title is back. Will the long layoff hurt this once-hot title, or will it pick up right where it left off? A new story arc will begin in this 44 pager at $2.99. That’s incentive enough to get back on this horse. Need more incentive? The original creative team, Brian K. Vaughan and Fiona Staples are back too. Image Comics promises no gimmicky variant covers here. So, what you see is what you get. This one sells out, it’s only the ONE cover selling out and not ten of them.
Thor #21 – The first FULL appearance and origin of God of Hammers.
X Deaths Of Wolverine #1 – More Wolverine revelations. Watch out if one of these crazy revelations within this entire series sticks and causes a ruckus.

The Death Of Doctor Strange #5 – This series continues to deliver. Writer Jed Mackay and artist Lee Garbett are bringing it.
Black Panther #3 – While DC Comics celebrates their 1050th Detective Comics issue, Marvel will stick to their silly renumbering here, but celebrate the 200th issue of Black Panther. Look for some future foreshadowing of the Black Panther.
Devil’s Reign Winter Soldier #1 – We all know Winter Soldier has a past, but we all do not know the whole story. Learn more about it here.
Superman & Robin Special #1 – Did you know that Superman first met Robin back in 1952’s Superman #76? The meeting occurred with Batman in tow. The first official team-up with Robin, without the Dark Knight, occurred some 19 years later! Worlds Finest Comics #200. Here’s something to chew on. With all of the craziness being spent on useless modern variants/first appearances that truly won’t amount to anything, the first Superman/Robin team book, a CGC 9.0, sold for only $103 recently. With a Neal Adams cover too. This is pure gold here. You should really click our link and find yourself a decent copy. Here’s the link again–> Worlds Finest Comics #200.
Batman/Catwoman Special #1 – Witness the beginning of the Bruce and Selina romance. Late artist, John Paul Leon is featured. He truly is missed.
Peacemaker Disturbing The Peace #1 – One of the greatest Punisher scribes will TRY to take the Peacemaker character to uncharted territory. We do not want to sound like Debbie-downers here, but why does it seem as though this Peacemaker character is being crammed down our throats. The vibe we’re getting -We (DC/HBO) like him MORE than YOU do, so we’re going to MAKE you guys/gals LOVE him-. Just seems that way. That all said, writer Garth Ennis is a veteran badass and will write the hell out of this story. It’ll be fun no matter what.