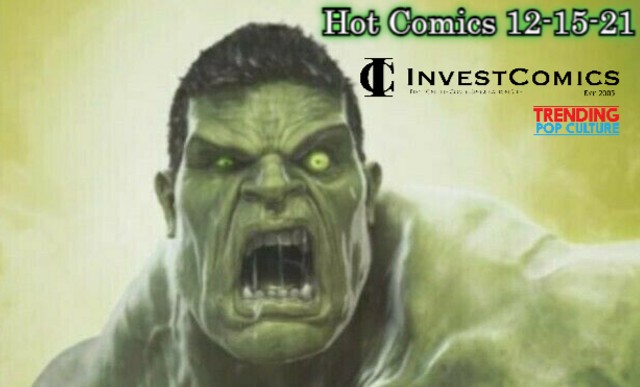 InvestComics/Trending Pop Culture; SINCE 2005.
Here are this week’s top Trending/Spec Comics out this Wednesday 12-15-21.
Please note: All new comic releases can and will change release dates from time to time. Check with your local comic shop on the guarantee of arrival time. If ordering from eBay, check with the seller or post details.
Click on ALL Red-Highlighted LINKS/Comic Covers to BUY/BID from ALL available eBay sellers.

Strange Academy #14 – Marvel takes us into the future of the Strange Academy. Maybe some first appearance nuggets?
Robin and Batman #2 – Writer Jeff Lemire will show us the first meeting between Robin and the Justice League. What could possibly go wrong?
Future State Gotham #8 – This issue will focus on “The Next Joker.”
Batgirls #1 – Accompanied by a ton of variant covers, this soon to be, new comic book day Wednesday comic, will sell out quickly. Two bad-ass female bat characters teaming up in the same book? Yes, count us in. Written by Becky Cloonan and Michael W Conrad. Art by Jorge Corona. Yes, this will be hot out of the gate, especially if a first appearance makes its mark with fans, adding to the need here (or hype websites/apps creating that unnecessary buzz, ripping people off).
Hulk #2 – Writer Donny Cates left an indelible mark on his Venom and Thor runs. His Thor continues, but the Black Winter (character/story) sent

those websites and apps on a feeding frenzy, taking “speculators” monies like it was free money day or something. So many got caught in that web of hype and are sitting on comics they spent way too much for. The same can be said for “Virus” in his Venom run. Does anyone even truly care about these characters anymore? InvestComics has tried to warn readers here time and time again to stay away from the unwarranted hype machines. It’s a false narrative so that THEY can make money, NOT you. Yes, you’ll luck up once in a blue moon, but more often than not, you’ll be left holding the bag after the false alarms are created. At the end of the day, Virus is just another new Spider-Man villain. That’s it. Nothing more, nothing less. Same with Black Winter or ANY new character created these days. Remember, there are only so many movies Disney will produce, with screen time given to characters like StarFox now or Blade. Do you truly think paying a ridiculous premium for a MAYBE appearance of Virus or a Black Winter to appear in a movie is productive? How’s that first appearance of Punchline going? Is she to appear in a DC film too? When? The spec market is a mere shell of itself. It banks on ONE thing these days, will the character appear in a movie. That’s it. That’s the comic spec market today. Thor #337 back when it came out exploded in the aftermarket because it was a fresh idea, a fresh take, a new direction for a stale character at the time. Nothing at all to do with a film. Nothing. In today’s market, the first question is always, “will they be in a movie?” This is not an investment market anymore, it’s perpetuated by the false hype to make fat cats more money, you must start realizing this. We have always stated, money is great. There is not a thing we condone about flipping a comic to make money, but when things are not real, driven by a false narrative, regular collectors will get gutted. Why do you think no one cares about the Red Foil Negan comic anymore? That comic sold for thousands of dollars at one time. A raw NM copy sold for $169 recently. When and if the Walking Dead movie ever arrives, this comic will be hyped once again, thus creating a hot market. Driving prices to where they simply do not belong. Then they’ll come crashing down once again. Be aware of this cycle. Get woke to the markers that are placed throughout eBay that are attached to these variant cover makers and websites/apps. This issue has been here for years and has been proven by certain outlets to be true. The hype is created, the markers are in place, they make money, the market dies down, recycle. We are trying to help collectors become more vigilant, InvestComics stated this when we came back a couple of years ago. The rant/education session is now over.
The Hulk #2 comic will continue Donny Cates new take on the Hulk Universe. This isn’t going to be a Greg Pak run, but it’ll be fun nonetheless. Mr. Pak created the entire Planet Hulk/World War Hulk universe and it remains extremely underrated considering how much is actually being borrowed from that run recently and still will be for years to come. Will Mr. Cates do a “Pak” like run? Probably not, but he may introduce an element or a character that’ll create the “buzz” so many websites/apps love to jump on these days. Buy the run at cover price, read the comic, enjoy it. Sell when and IF the hype goes into overdrive. There will be zero validity for the overpriced comic(s) if it does happen.
Amazing Spider-Man #81 – Ben Reilly vs. Miles Morales! Spidey vs. Spidey.

Defenders #4 – Learn the true origins of Marvel’s multiverse. This here is quite important given the fact fans are entering the Marvel multiverse phase in the theaters. Although no ties are expected right away, maybe down the line eventually? Writer Al Ewing is laying down the groundwork here.
X-Force #26 – A new mutant technology is introduced.

From week to week (since 2005), we talk about various new releases that are supposed to make their way on their arrival date, but things do not tend to always work out that way. Comics get delayed, pushed back, and sometimes pushed out altogether. It happens. No big deal. We’re going to sometimes highlight a comic or two that will make its way to your hands THIS week as opposed to the time we highlighted it, last week or previously. The thing is, if you jumped on this week’s highlight LAST week, via an eBay purchase (cannot always rely on the comic shop special pull for you), you’d be ahead of the game and not chasing a hot comic THIS week. See, it actually works out better for ya! Wastelanders Wolverine #1, out THIS week, will feature an appearance from Baby Hulk! Not a typo. Baby Hulk smash?!