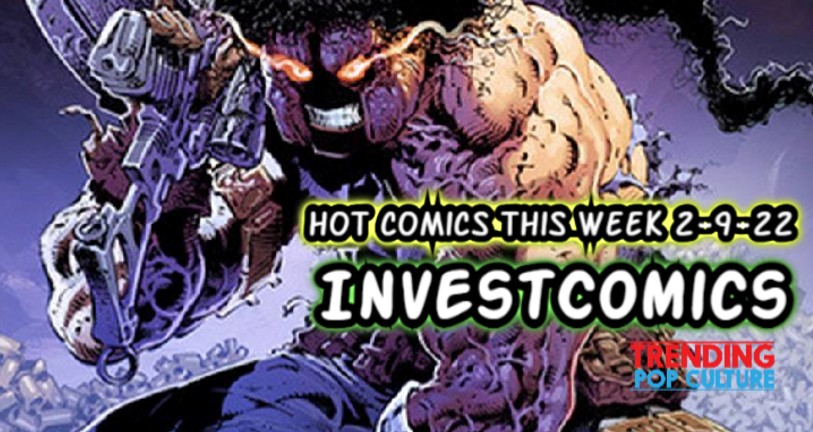 InvestComics/Trending Pop Culture; SINCE 2005.
Here are this week’s top Trending/Spec Comics out this Wednesday 2-9-22.
Please note: All new comic releases can and will change release dates from time to time. Check with your local comic shop on the guarantee of arrival time. If ordering from eBay, check with the seller or post details.
Click on ALL Red-Highlighted LINKS/Comic Covers to BUY/BID from ALL available eBay sellers.

The Amazing Spider-Man #88 BEY– This Spidey “Beyond” comic will bring back the team Slingers. The first appearance of the Slingers happened in 1998. Literally in quarter boxes at comic shows and your local comic shops for the longest time. These days, with the overpriced modern spec market, it’s not a quarter anymore. Not an expensive comic in the least either. Wizard released a number zero comic, Slingers #0, introducing the new team. The comic carries the very first appearances of Dusk and Ricochet, which are team members of Slingers.
Life Zero #1 – New series from Ablaze Comics. Superstar Daredevil artist Marco Checchetto and writer Stefano Vietti.
X Deaths Of Wolverine #2 – This new issue comes with a spoiler alert cover.
Secret X-Men #1 – Another number one X comic. This time starring two of the original New Mutants from way way back. Sunspot and Cannonball.

Prophet #1 – We spoke of the quarter box comics a little earlier and Youngblood #2 from 1992 was definitely in that same box. It’s the first appearance of Prophet. Silly movie news, with no concrete filming or anything besides an announcement back in October of 2021, has driven the first appearance to places it simply does not deserve to be, but the “expert” speculators would say otherwise because they’re looking to make a buck. A recent Youngblood #2 CGC 9.8, sold for $155. Now, you may say, well that isn’t really a lot of money. Well, considering ONE, where prices WERE after the announcement and TWO, The amount of cases of these comics sitting around is astounding. These comics couldn’t be given away at one point. It truly is a different modern speculation market these days with absolute sh*t spec comics getting play now. When that yard sale pops up in your neighborhood in the springtime, and they have comics, you will be almost guaranteed to find a Youngblood #1, a number two, and a Spawn #1. These were some of the college fund comics for many people many years ago.
Maestro World War #1 – The last chapter of Peter David’s Maestro story. World War Hulk was kind of a big deal back a few years ago, so Peter will go with World War M (M, for Maestro).
Weird Love Tales #1 – Anyone notice how DC Comics and Marvel for the past few years or so have been releasing lots of romantic-type comics? Are they honing in on an audience that we’re all not really aware of? Romance novels have always been a thing, sells well, but we haven’t seen many seeking the romance comic at the local shops of late. You’ll always get these rare instances where someone on social will vehemently disagree and says how there is a tremendous market for it. Okay expert, relax. A 7.5 CGC Young Romance #1 from 1947, a Jack Kirby and Joe Simon cover, the first-ever romance comic, sold recently for 2k.
The Mango Lorian #1 – The parody comics from KeenSpot are a lot of fun. Here they parody the Mandolorian. The cover here alone is worth the $5.99 price tag. Great job KeenSpot.