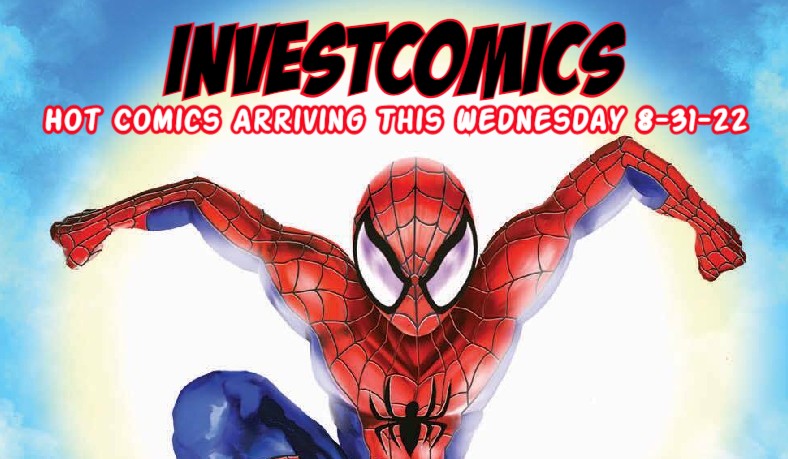 Here are this week’s top Trending/Speculative Comics out this Wednesday 8-31-22.
Please note: All new comic releases can and will change release dates from time to time. Check with your local comic shop on the guarantee of arrival time. If ordering from eBay, check with the seller or post details.
Like something we’re talking about? Like a cover? Like the debut of a new series? A first appearance?
Click on ALL Red-Highlighted LINKS/Comic Covers to BUY/BID from ALL available eBay sellers now (always buy from high-rated eBay sellers).

Amazing Fantasy #1000 – Marvel arrives at the “fantasy” number “1000” in celebration of the debut of Spidey in Amazing Fantasy #15 60 years ago. Kind of like when DC was doing their millionth issue bit, but not. It’s a silly premise to arrive at a number that doesn’t really exist within the title instead of just having a one-shot celebration number one issue named something other than “1000”. Okay, enough of the ranting on a stupid number. Let’s get to some of the interior/importance of this comic. Many comic creators will contribute here, including the long-awaited return of a legend, Neil Gaiman. Writers Armando Iannucci (Veep) and Anthony Falcone will both make their Marvel debut. And for the speculation market, the first appearance of Witch-Queen. We’re quite sure more surprises await in this comic. They’ll be various variant covers to choose from as well. Your best bet is to definitely pick this up and enjoy it.
Thunderbolts #1 – InvestComics said this about the Thunderbolts in 2017. Before any movie announcements; It’s hard to believe the Thunderbolts will be celebrating their 20th anniversary in Thunderbolts #10 this Wednesday. Way back in Incredible Hulk #449, we got our first look at the then Thunderbolts team. The team has changed a number of times over the years, but that 1997 book was their first appearance. The 20-year-old comic is still relatively affordable in some places on Ebay. A recent CGC 9.8 sold for $650. Not too shabby. Along with the new series, this Wednesday will come Thunderbolts Marvel Tales #1. This book will do the reprint thing on the number one issue from 1997 and their first appearance in Incredible Hulk #449. Lots of Thunderbolts will come our way because of the film announcement. So, expect Thunderbolt overkill until then.
Loaded Bible #6 – If you come around here every week, which we know you do, you’ll know we’ve pointed out a few sus comic covers in recent weeks. Covers that either push the limit or flat out leave one scratching their head. Here’s one that’ll do a little of both this Wednesday. The cover depicts the lead character (we presume), holding two crosses (with blood dripping off them) as dagger weapons. Is this the character’s weapon of choice? We have no idea, we do not know enough about the title to assume this. Maybe he’s even had these crosses on previous covers and we never noticed it before until now. Well, how these comic covers continue to push boundaries without upsetting someone in today’s environment is amazing really.
Power Rangers: Unlimited Death Ranger #1 – Slap a joker smile/The Batman Who Laughs smile on a Power Ranger and Blammo! The first appearance of Death Ranger. Easy peasy.

Harley Quinn 2022 Annual #1 – A new status quo begins right here for Harley Quinn. How will things look different for the Harley character moving forward? It’ll be interesting to see what direction we’re headed. Another HQ number one issue hits this Wednesday as well, Harley Quinn The Animated Series: The Real Sidekicks Of New Gotham Special #1.
Mech Strike Monster Hunters #3 – With DC’s new Mech world picking up, Marvel’s Mech world has been full steam ahead. DC, playing some catch-up as usual. This issue promises a big reveal on the last page.
Superman Warworld Apocalypse #1 – Here’s a one-shot with a half-naked Superman on the cover.
Wonder Girl 2022 Annual #1 – Learn more about the new Amazon tribe in this annual.