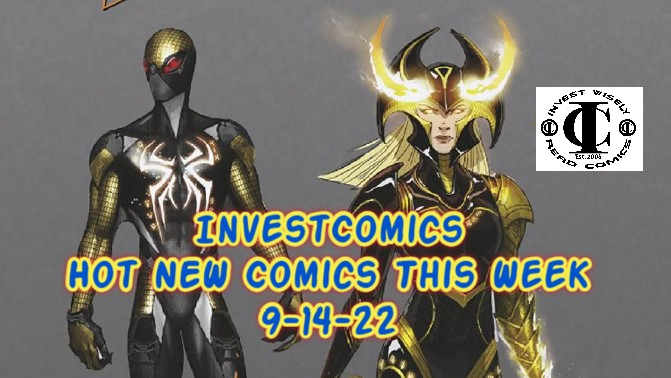 Here are this week’s top Trending/Speculative Comics out this Wednesday 9-14-22.
Please note: All new comic releases can and will change release dates from time to time. Check with your local comic shop on the guarantee of arrival time. If ordering from eBay, check with the seller or post details.
Like something we’re talking about? Like a cover? Like the debut of a new series? A first appearance?
Click on ALL Red-Highlighted LINKS/Comic Covers to BUY/BID from ALL available eBay sellers now (always buy from high-rated eBay sellers).

We’ve been at this comic book speculation thing since 2005 offering up the earliest hot pick comics before they were ever thought about by anyone. The first and longest site in all the land; InvestComics. We never asked anyone to pay for the invaluable information we have given year after year. We would like to extend some options to donate anything you can from time to time to our free site. While we enjoy immensely, the speculation profits we have brought many of you over the years, we too have expenses to meet regarding the website. We’d appreciate anything you can offer. If you cannot donate, that’s fine too! We love you guys/gals just the same! As always, enjoy your time here!

Amazing Spider-Man #9 – Spider-Man teams with Wolverine. We all love when these two get together. And a possible first appearance too. They face a mystery villain.
Midnight Suns #1 – The gaming world is currently on fire with Marvel finally about to release the much anticipated/delayed Midnight Suns game. The timing here is impeccable with this number one issue arriving on Wednesday. And is that a first appearance (game variant) Midnight Suns Spider-Man armor cover? We’ve seen Spidey don other armors, just not this one. Look for the interest to be a bit more with all of the video game noise in the background.
Edge Of Spider-Verse #3 – The first full(?) appearance of Night-Spider. We say this every single time with the Spider-Verse comics. Purchase all issues, there are practically first appearances in every issue.
Batman Vs. Robin #1 – The title alone here should get fans out of their seat. Let’s how it’s a “real” throw-down for a few issues though. We have writer Mark Waid and artist Mahmud A Asrar on this book so we know we’re getting quality there. Should be a fun book, but we want to see hands.

Ms. Marvel & Venom #1 – The first ever team-up between these two. Marvel promises a reveal as to who is controlling the narrative within this storyline.
Predator #2 – Regular readers around here know what’s up so you can skip ahead if you’d like, but for newer readers, read ahead. With each new issue of Alien or Predator, a collector should be picking up every new offering Marvel throws out there. This is Disney’s FIRST venture into their new franchises. When they finally decide to release the new (reset) franchise movies, they may borrow from some storyboards that already exist in their literal library. Borrowing a character, a plot line, a new monster, a new world, etc. When, not IF, when this happens, well, you know the rest.
King Spawn #14 – Look for a possible first appearance.
Harley Quinn 30th Anniversary Special #1 – A huge celebratory comic here. It’s been 30 years since the comic fandom was first introduced to Harley Quinn. Hard to believe, right? Feel old yet? This celebration special has so many superstar writers and artists it is insane. Seriously crazy. Guess it matches the insanity of our star subject. DC promises a whole lot of new short stories in here with those mega-talents at the helm. Besides the good possibility of a first appearance popping up within these pages, one thing we did notice is the appearance of Jimmy Palmiotti and Amanda Connor’s creation; Red Tool. Their parody take on Marvel’s Deadpool. Anything Jimmy and Amanda ever create is a definite yes from us. So, Red Tool is back in Harley’s life? Maybe. We’ll have to wait until Tuesday (still weird to say Tuesday and not Wednesday, but we’ll play along for now). Here’s a quick note too, the first appearance of Red Tool came in Harley Quinn #26 (2016). Of course, we gave y’all a heads up on that one, but raw copies are mega affordable right now. The graded 9.8’s sell around the $150 area. Still not too shabby for a $3.99(?) cover price. But get some of those raw copies in minty freshness and hold onto them for a little bit. If Red Tool ever decides to become a major major player in the HQ world, you’re all set to flip-flip and make some extra bread. This all said, the new release should be on your radar this week, even if the retail price is $9.99. And check out some of the great covers right HERE.
Maskerade #1 – Here’s a hit comic tucked away that no one will see coming, except for our loyal readers here. Writer Kevin Smith, yes THAT Kevin Smith, will debut his imprint; Secret Stash Press, with this new vigilante-driven story. The premise hits like something you’d relate to. Here’s the short version. Felicia is a social media icon, her little brother was murdered, she was experimented on when she was little, and now she wears a mask and kills the bad guys. The first appearance of Felicia Dance and the debut of the new imprint. This is a definite pick-up for us and should be for you as well. This could be one of those “one per person buys at your local shop. Make sure to click on our red/yellow links or the comic cover to get more if you’d so desire.

The Flash The Fastest Man Alive #1 – This restart issue contains the villain Girder. He first appeared in the once-hot comic, The Flash Iron Heights.
Dark Crisis Worlds Without A Justice League Wonder Woman #1 – There are so many “Crisis” crossover books, that it’s hard to keep up. Maybe there aren’t that many actually, just seems that way. In every one of these Dark Crisis stories, a “major” change or event or something is taking place. A lot of hype, hopefully, it meets talking points.
Bone Orchard Mythos Ten Thousand Black Feathers #1 – New horror story from writer Jeff Lemire, artists Dave Stewart and Andrea Sorrentino. Yes, please.
Star Trek Lower Decks #1 – The Paramount animated series is a big hit, so here is the comic book debut of the new Star Trek universe.
The Least We Can Do #1 – From Image Comics. Magic and politics in the military-occupied UK. A new story from Lolanda Zanfardino (writer) and Elisa Romboli (art).