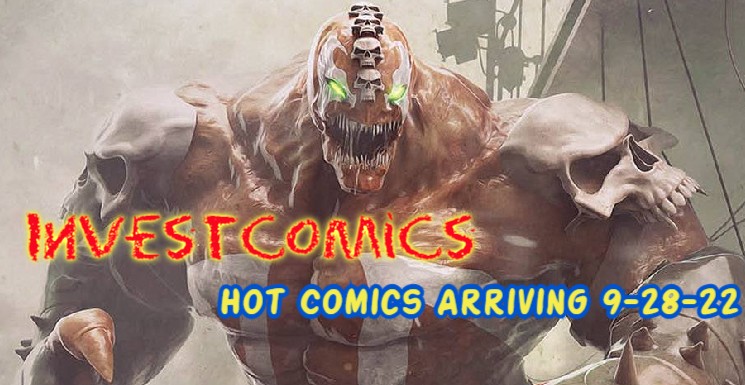 Here are this week’s top Trending/Speculative Comics out this Wednesday 9-28-22.
Please note: All new comic releases can and will change release dates from time to time. Check with your local comic shop on the guarantee of arrival time. If ordering from eBay, check with the seller or post details.
Like something we’re talking about? Like a cover? Like the debut of a new series? A first appearance?
Click on ALL Red-Highlighted LINKS/Comic Covers to BUY/BID from ALL available eBay sellers now (always buy from high-rated eBay sellers).

Amazing Spider-Man #10 – A flashback issue, reliving one of the two most devastating moments in Peter Parker’s life. The John Romita Jr. cover gives away the mystery here. And John’s dad, Romita Sr., was one-third of the reason Gwen Stacy bit the dust in the first place. Along with Roy Thomas and Gerry Conway. Next year marks the 50th year anniversary since the release of that fateful issue (Amazing Spider-Man #121).
Marvels Voices Community #1 – A major first appearance of a new Marvel Latin character, Chimera. These Marvel Voices comics offer a whole lot of first all the time. New characters and new creative talent are always on the main menus here. Always, always, pick these books up on new release day.
Thunderbolts #2 – We learn more about new characters in this issue. The origin of Eegro. Thunderbolts #1 introduced us to Eegro and Gutsen Glory. Look for a constant pattern of new characters and villains appearing from the outset of this series.
Action Comics #1047 – DC Comics promises new characters to emerge leading up to the 1050th issue.
Fortnite X Marvel Zero War #5 – We inform readers all of the time regarding the Fortnite/Marvel collaboration about the potential breakout of a Fortnite character wedging their way into the Marvel U. If this happens, wow for the lucky recipient that owns the first appearance issue of the said possible character(s). Anyway, about the cover this week. The Secret Wars homage cover shows Spidey in a new Fortnite costume. Dope.

Thor #27 – Not too long ago, writer Donny Cates was the darling of the comic book community with two of the biggest comics on the market at the same time. He was writing Venom (Knull) and Thor (Black Winter). Those two stories were bringing in so much aftermarket money for speculators, it was absurd. Many have lost money then and at this point, but if you listened to us, you wouldn’t have, just saying. This Wednesday, Donny Cates reunites the two characters that put him in a different tax bracket in a Thor book. Venom and Thor team up. Interesting, odd team up too. Also, check out the Thor vs Predator variant cover.
Tim Drake Robin #1 – A new Robin series starring Tim Drake. Writer Meghan Fitzmartin and artist Riley Rossmo. Look for a possible first appearance(s) here.
Deathstroke Inc. #13 – Deathstroke Year One continues. Writer Ed Brisson is bringing it. Artist Dexter Soy doing his thing too.
Old Dog #1 – The first appearance of Jack Lynch, from Image Comics. A story written and drawn by Declan Shalvey. Described as a spy-fi series within the Winter Soldier/Mission Impossible realm. Yep, we’re in.

Spawn The Scorched #10 – Learn more about the villain so bad-ass, he goes by a letter, K.
DC Horror Presents Sgt. Rock Vs. The Army Of The Dead #1 – Why haven’t we seen a Sgt Rock movie starring Dwayne Johnson yet? Man, that would be spectacular. Halloween arrives early this year as DC teams with horror writer Bruce Campbell.
Flawed #1 – The first appearance of Gem Ezz. A “Punisher-like” story from Chuck Brown (writer) and Prenzy (artist).
Briar #1 – It’s not the first time a happy fairy tale story has gone awry in a comic book format, and it certainly won’t be the last. We love these tales all the same. They’re fun in the sense we get to read the sick demented ways writers come up with their horror twist on an ageless story. Boom Studios offers up Briar, which depicts the Sleeping Beauty story with a different outcome than we all know. From the looks of the cover, things go sideways in a hurry and we’re here for it. Boom Studios have had numerous hit horror comics and this one could be next. Writer Christopher Cantwell and artist German Garcia.
A.X.E. Avengers #1 – More A.X.E. action as Marvel continues their big summer storyline. More number one AXE issues to come.